Every year during the Worldwide Short Film Festival, I try to get out to at least the midnight Creepy Programme. This year I had to race to The Bloor, as I’d just come from a late screening at Trash Palace – if you ever get the chance to see an Italian crime flick called Strange Shadows in an Empty Room, please do so.

I don’t know, overall, I’d say this wasn’t one of the strongest years I’ve seen from the Creepy programme. It certainly didn’t help that the best short being offered up was not only the first shown, but also one I’d already seen – The Legend of Beaver Dam. The other one I was pretty high on was Dan Gitsham’s Ella. IT was a cool take on Little Red Riding Hood that starred Anthony Stewart Head, an actor I don’t get to see near enough of these days. 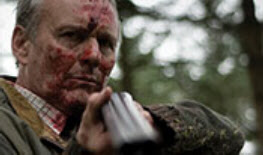 The rest of the shorts all had their moments, but there was always something that detracted from them as a whole. The Spanish short The Circular Glance had me; then lost me, and all I could think of during Jonathan Caouette’s All Flowers In Time was ‘okay, man. You like David Lynch. We GET it.’
More memorable was The Adder’s Bite, which had a wonderfully dark visual style, but its start & finish seemed unrelated to its middle. Director Firas Momani was apparently inspired by a Nietzsche poem, so I wouldn't be surprised if the connection was just over my head. I had a friend tell me after that I was reading into it too much and should have just taken it for what it was. That may be true, but I still think that it would’ve been stronger without the uninteresting bookends. 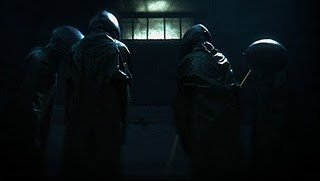 The final short, Ninjas had its moments, with one particularly gruesome sequence, but I think this offering from Brazil ended up being a little too esoteric for its own good.
My slight disappointment may be the result of not getting that one short that’ll stick with me, like Off Season or Violeta have from previous years. However, it is possible that I was just too burnt out to enjoy myself. It was the end of a stressful week and I’d watched two flicks just before walking into The Bloor, so my mental state may not have been ideal. I’ll guess you’ll just have to check them out for yourself and let me know what you think.
Posted by Jay Clarke at 10:03 AM