It Came From the Archives 12!

Here’s an interesting blast from the past, swiped long ago from my father’s ‘secret’ stash. It is an article from a reputable gentlemen’s magazine – or at least as reputable as something that features a pictoral entitled ‘Rear Entry’ can be – about the new technologies taking the world by storm in the early eighties. Click on the images to enlarge the Video Madness. 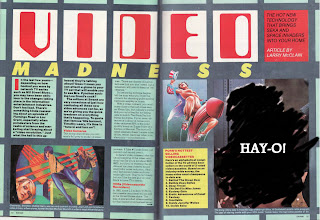 See! We really do read them for the articles! 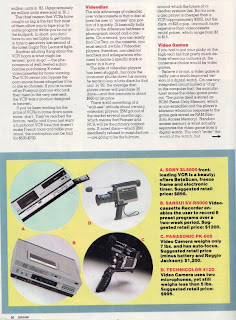 It is funny how inflation affects all things, except electronics. Twelve hundred dollars for a VCR??? Nowadays, that chunk of change would buy you three Blu-ray players and you’d still have enough left over for a decent television to use them with. It’s sheer craziness! 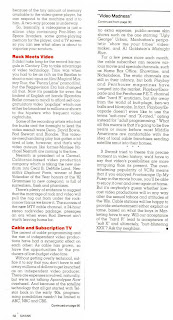 Sorry, I missed a bit there in between those two columns. It was a tiny blurb outlining your three television viewing options; basic cable, paid cable and subscription services.
Even if Mr. McClain had a crystal ball at his disposal, I don’t think he could have predicted how far we’d come in thirty years. Now, anything you desire is at your fingertips. And if by chance it isn’t available digitally, it can be delivered to your doorstep within a few business days. Ain’t technology grand?
Posted by Jay Clarke at 10:03 AM