A Return To Silent Hill

The last event at The Bloor, before it shuts down for renos, was a 35mm screening of Christophe Gans’ Silent Hill, presented by Fangoria editor Chris Alexander. 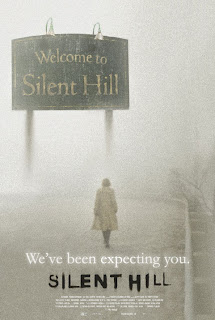 I was a big supporter of the movie when it came out, and don’t think it deserved to get shit on as much as it did. As you know, I tend to be drawn to flicks that have visual flair, and Silent Hill has that in spades. It is all about building mood and atmosphere. Watching it again, I was immediately reminded of just how well Gans captured the feel of the video games. The locations, creatures and even shot composition are reconstructed in meticulous detail. Even gameplay touchstones, like the foghorn and radio static are used to full effect. Gans loved the games, and it shows onscreen. In my opinion, Silent Hill is the still the best video game “adaptation” out there.
The print looked wonderful, and the sound was probably the best I’ve heard that space sound in quite some time. The only real grievance I had seeing this five years later, apart from it being more noticably bogged down by exposition, were some of the dated visual effects. It’s a common problem with CG heavy horror movies, but the gore, which is sometimes shockingly extreme for a mainstream flick, acted as a good counter balance. The most important parts of Silent Hill are its disturbing set pieces, and those still hold up beautifully. Nightmares, it would seem, translate in any medium. 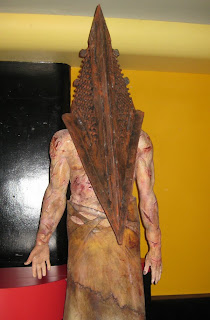 Those who text during the film will be flayed.
The Q&A afterwards was quite informative, with lots of great tidbits being shared. On hand were F/X man Paul Jones and the actor who played the unforgettable Red Pyramid, Roberto Campanella. Director Michael J. Bassett and producer Don Carmody of the upcoming Silent Hill: Revelation 3D were there, as well. Jones and Campanella, who both worked on the sequel as well, talked at length about translating the creatures of the games to the big screen. Here below, is a bit of video I shot, with Jones and Campanella talking about mixing practical effects with CGI.

Later, Bassett came on stage and said his vision of Silent Hill is slightly different from Gans', but maintaining the feel of the games was still the first priority. He also mentioned his initial reluctance about using 3D gave way to realizing that the technology could be well utilized during the transitions between the realms of the Silent Hill universe.
I don’t necessarily share Alexander’s sentiment that somewhere down the line, Silent Hill will be as important to the genre as classics like The Shining and The Exorcist, but I do agree that it is a woefully underappreciated gem of surrealistic horror.
Posted by Jay Clarke at 10:07 AM