It's The End Of The World As We Know It.

Canadian indie The Collapsed is currently playing a limited run in Toronto, so me and a few buds checked it out last weekend. 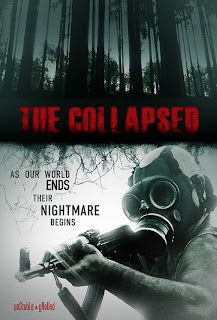 A family desperately tries to find safety as the world crumbles around them.
For some reason, I always thought the end of the world would be more… exciting.
The Collapsed is one of those movies that is good in concept, but not so much in execution. You can’t pad out a simple idea like this to feature length and not expect to try the patience of your audience. While I did appreciate that the movie hits the ground running, not feeling the need to explain what is going on or how it happened, it tends to stay at the same level for a painful amount of time. The performances and dialogue are serviceable, but they can’t sustain a movie that is largely people moving through a forest, occasionally stopping to point their guns offscreen while the camera spins around them, or pushes in Raimi-style. This constant repetition was probably why I lost investment in the characters, resulting in the big moments not landing as heavy as they should have. Eventually, this all leads to a conclusion that - though not entirely original - was somewhat interesting, but takes waaaay too long to get there.

I wish I like The Collapsed more, as the production values are pretty good, making it look like it cost more than it likely did. When it comes down to it though, there just aren’t enough interesting plot points to justify its running time. If this had been a fifteen-to-twenty-minute short, it would have had more punch. As a feature, there just isn’t enough here.
Posted by Jay Clarke at 12:34 PM