A Road Trip From Hell. 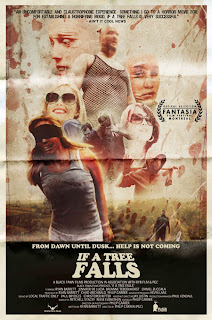 When four friends travelling across Canada stop to camp for the night, they are stalked by a ruthless gang of locals.
Director Phil Carrer & writer and star Ryan Barrett have laid down some raw and wholly downbeat stuff here. For the most part, I liked If A Tree Falls, but did find it a little uneven. It is one of those efforts, and I find this a lot with low-budget indies – 2004’s Malevolence being another example – where a few key elements make it a memorable affair. Its washed-out grindhouse aesthetic is extremely authentic, even perhaps too much so. I love this style as much as the next guy, but you don’t want it so overwhelming that it distracts from the actual subject matter. I did however, think that the plucky folk music was an excellent choice, as it instilled a juxtaposition reminiscent of Wes Craven’s Last House on the Left. 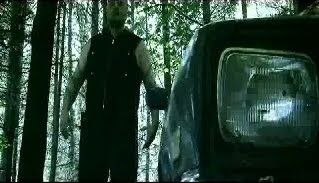 The movie has several individual sequences that worked, an early sequence with Laurie (Emily Alatalo) and a later section with Lisa & Vanessa (Jennifer De Lucia & Breanne TeBoekhorst) inside their tent were very effective, but I had some issues with the movie overall. The motivations, especially toward the end, of both the hunters and hunted were a little muddied. I have since learned it was meant to be that way, as Carrer and Barrett have a sequel in mind. I also found the gore to be a little inconsistent. The execution was fine, but there were a few occasions where the wounds didn’t seem to match the severity of the damage inflicted.
One thing I am impressed with, is the solid marketing behind If A Tree Falls. The trailer and poster are both top notch and of course, I’m a big fan of THIS. 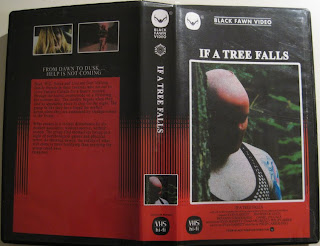 I'm so chuffed that some filmmakers have started doing this. It really shows a love for the era my generation of horror fans cut our teeth on.
I could rhyme off a list of films, from Jeff Lieberman’s Just Before Dawn all the way up to 2008’s Eden Lake, where this has been done better, but If A Tree Falls is still worth a watch. I admire the filmmakers’ get-out-and-do-it attitude and what they accomplished on a non-existent budget.
Posted by Jay Clarke at 10:02 AM

You can now watch online or purchase a DVD copy of "If A Tree Falls" from www.blackfawndistribution.com! Check it out!