Good morning everyone! Here's some news to help cure that Friday the 13th hangover.
Lance Speaks!
I just found about this week that character actor Lance Henriksen's autobiography came out a few days ago. 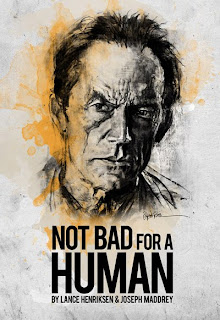 Seriously, that is the best fucking title ever! The book, co-written with Joseph Maddrey, spans Henriksen's entire career. Judging from the few tales he told during his appearance at last year's Festival of Fear, I can't imagine how many fascinating yarns are in this book's pages. For more info, check out the Not Bad for a Human website by clicking here.
Trailers.
Here are a pair of trailers for some notable horror releases. First, is the fifth entry in the Final Destination series.

Ugh, they had to go there. My chances of undergoing laser eye treatment just went from less than one percent to ZERO. As preposterous as that scenario is, it still doesn't make it any less gruesome a thought. So, it's a bridge accident this time. Sooner or later, these guys are just going to run out of disasters.
Second, is the new trailer for the remake of Tom Holland's Fright Night.

This actually looks a lot better than I was expecting. The trailer makes it a lot more serious than it may actually be, as Peter Vincent (David Tennant in an inspired piece of casting) is only glimpsed in this trailer. Even so, there is no denying they've assembled a great cast here.
The Dirt Pazuzu.
Lastly, I wanted to throw in an awesome commercial from Germany that played on G4 a while back. Again, I have to ask; why are European ads so much better than ours?
Posted by Jay Clarke at 9:13 AM

I'm kind of excited that they are bring out a new fright Night movie. The original was one of my all time favorite classic vampire film. Should be good! Can't wait...