It is hard to believe this little feature is entering triple digits. I can't think of a better time than to unveil my new (I know, finally, right?) DKTM banner!

Truth be told, I'm actually knee-deep in sleaze right now, so I had to cook up today's special for you retroactively, but I'm sure you understand.
Sweet Zombie Christ!
Here's the new Grindhouse-inspired trailer for Call of the Dead.

While it is not surprising that Treyarch had some more Black Ops zombie DLC up their sleeve, no one could've predicted it would be this bone-meltingly awesome. Four, strike that, FIVE genre icons in one undead FPS? This is basically a license to print money for Activision. And here I was, thinking about trading in my copy of Black Ops. Call of the Dead rises from the grave on May 3rd.
The Virus Has Left The Building.
Here's the brand spanking new poster for [REC]3 via Twitch. 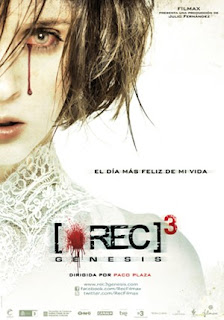 With Paco Plaza still at the helm, I have no reason to believe this won't be as successful a zombie romp as the first two installments. With Jaume Belaguero's follow-up already planned, [REC] may become the most badass horror franchise of modern times.
Splatter Matters. 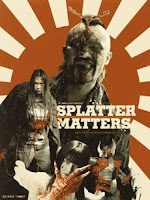 Perhaps the biggest news for me this week was finding out I will be watching Helldriver in T-minus twenty-five days. Rue Morgue and Sushi Typhoon have teamed up for an Japan relief benefit called Splatter Matters, which will see the latter's impossibly bloody wares screen in eight cities around North America. Helldriver and Karate-Robo Zaborgar will play the Toronto Underground on Thursday, May 26th and you can bet your machine gun-appendaged ass that I'll be there. To see if Splatter Matters is coming to your town, click here. Here below, for shits and giggles, is the trailer for Helldriver.
Posted by Jay Clarke at 9:00 AM