Happy day to all the matriarchs out there. I'm going over to visit mine in a few, so I'll keep this brief.
Fantasia's Fifteenth.

This week, Twitch announced some news on this year's edition of the Fantasia Film Festival, along with one sweet poster from Montreal artist Donald Caron. 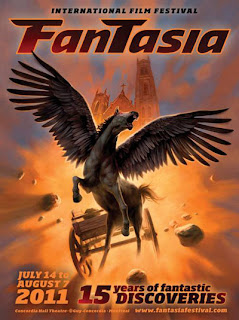 Fantasia runs from July 14th to August 7th and features over one-hundred and twenty films from around the world. Mastermind Mitch Davis also announced a retrospective programme called Maple Syrup Thrills featuring the work of producers John Dunning and André Link. The founders of Cinepix helped bring forth the early works of David Cronenberg, classic eighties slashers like My Bloody Valentine & Happy Birthday To Me and the infamous Ilsa films. Also on the docket, is the world premiere of The Theatre Bizarre, an horror anthology project featuring the likes of Richard Stanley, Doug Buck and Tom Savini among others. I always look forward to that week in July where I make the pilgrimage to Montreal, but these two things are just sweetening the pot. How epic would it be to see Richard effing Stanley in person? For the full announcement, click here.
But He Had Sprinkles!
I came across a web game called Free Ice Cream, while surfing for "scary horror games" the other day. I know it's a few years old, but if you haven't played it I can think of no better way to burn fifteen minutes at your desk. Click the image below to check it out. 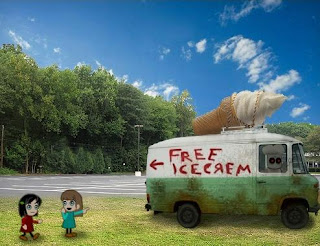 Back On Track?
Let's face it, the last season of Dexter was fairly lackluster. After a steady incline in quality over the previous three seasons, our last set of thirteen eps peaked too soon and then laid just there like a shrinkwrapped ne'er do well. However, this new teaser implies that the shit is finally going to hit the fan this time around.

The new season begins this fall.
Posted by Jay Clarke at 12:32 PM