Director Joe Cornish’s alien invasion comedy Attack the Block made a splash at SXSW last March, picking up the Midnight Audience Award. It was then immediately snapped up by Sony, and released in the UK a few weeks ago. On Wednesday, with its North American release uncertain, it was screened in select cities, including Toronto. 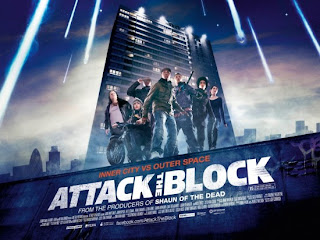 A group of delinquents fight to defend their South London neighbourhood from an alien invasion.
Attack the Block was a really fun time. It would be hard not to compare it to the works of Edgar Wright – who coincidentally has an executive producer’s credit on the film – as it has a similar mix of genres. And like Wright, Cornish is also not afraid to sprinkle in the splatter with his comedic riffs. However, he goes beyond just aping his contemporaries, as the film is technically sound, as well. I think what stood out to me the most though, was the score by Steven Price. It wonderfully punctuates the film with high-energy compositions that pump things up from the get go. 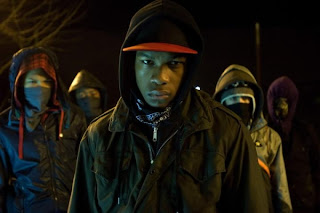 Attack the Block is populated with great young talent, most prominently John Boyega and Alex Esmail as Moses and Pest, respectively. The interactions between the gang of teens made for several laugh-out-loud moments, which, thankfully, weren’t all in the trailer. The instantly recognizable and always hilarious Nick Frost also appears in a supporting role. Another highlight for me, and what I think made the movie a success, were the creatures. The designs were really cool and the choice to have them be jet black – save for their fluorescent green jaws – was inspired. It helped the CG considerably, as the solid palette alleviated the blurring you often get when animating textured objects. 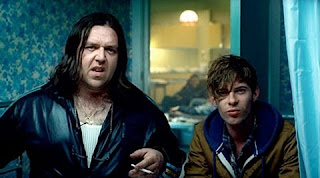 So, as I mentioned at the top, there is currently no North American release date for Attack the Block. My only theory as to Sony’s reluctance is the thick London dialect spoken within. Now, while I didn’t catch everything, I was always able to get the gist of what was being said. It certainly didn’t take anything away from my enjoyment, that’s for sure. But, then again, Sony isn’t worried about me. They’re clearly focused on “general” audiences, for they can be finicky lot that won’t read subtitles and reject black & white.
All I know is that depriving people of Attack the Block would be a shame. It is a highly entertaining flick that is well worth supporting and could very well be Britain’s equivalent to Super 8.
Posted by Jay Clarke at 10:05 AM