Last Thursday, I went to the Japan relief benefit at the Toronto Underground, the last stop on the tour that started a month ago in New York. Put together by Rue Morgue magazine and Sushi Typhoon, all proceeds went to aid the relief efforts from the disaster on March 11th. 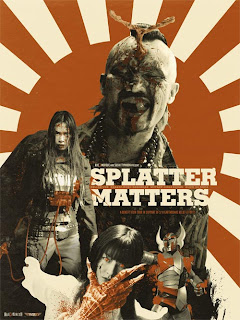 On the sched were two of Sushi Typhoon's latest offerings, Karate-Robo Zaborgar and Helldriver. The former was a remake of an old Japanese kid's show from the seventies, in the same vein as Ultraman. It was entertaining enough, but I think the best part of it was the end credits where they showed footage from the original show. It was incredible how much Noboru Iguchi's film looked like the source material, except of course with the addition of CG and hot chicks.
As I'm sure you can guess, the real reason I was there was Helldriver. I've wanted to see Yoshihiro Nishimura's spiritual successor to Tokyo Gore Police, since it was announced last year at the inaugural Sushi Typhoon screening of Alien vs. Ninja. It was pretty much exactly what I was expecting, with equal measures of gushing arterial spray, Asian beauties with deadly weapons – in this case a chainsaw sword! - and unhinged ridiculousness. These movies employ a very simple formula, and I'll be the first to admit that the majority of them go on about twenty minutes too long, but they never cease to amuse me. Every time my mind starts to wander, something off-the-wall happens and pulls me back into it. It's like Nishimura has it down to a science, much like that whiteboard I theorized about while they were making Tokyo Gore Police. 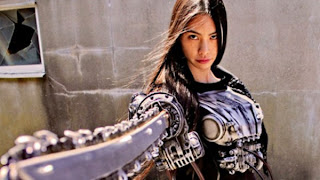 In Helldriver, Newcomer Yumiko Hara takes on the zombie killing duties, as Eihi Shiina plays the villain this time around. Actually, there were several actors that I recognized from other Sushi Typhoon movies in here, as well. I get the feeling that there is a real familial camaraderie going on behind the scenes of these productions. I have to wonder how much longer Sushi Typhoon can sustain their audience though. While I am still enjoying their output, I fear that interest in this genre is waning. Previously, Tokyo Gore Police and Vampire Girl vs. Frankenstein Girl played to packed houses, but the turnout for Splatter Matters was extremely poor. I don't know whether it was the date, venue or lack of press, but a charity event should have pulled in way more people. 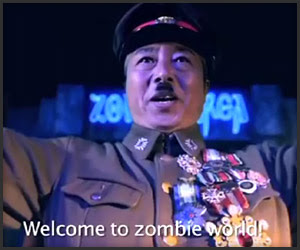 Anyway, Helldriver is more of the same stuff you would expect from Nishimura. I wager you already know which side of the wall you sit on, don't you?
Posted by Jay Clarke at 10:02 AM