A Mother Only A Son Could Love.

The eighties bore witness to hundreds, nay, thousands of horror flicks. No matter how misspent your youth was, there's just no way to have seen them all. There's always gaps in the catalogue. Charlie Kaufman's 1980 backwoods horror effort Mother's Day is one of those titles for me. Fortunately, this month's Rue Morgue Cinemacabre screening was... 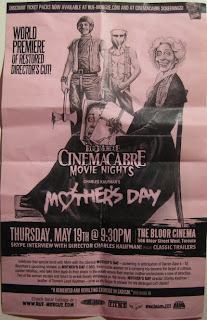 Three college friends on a camping trip are abducted by two rednecks and their insane mother.
It seems odd that as striking as that coverbox above would have been back in the day, I still passed it over. I guess I was more interested in Troma's flashier offerings like the Toxic Avenger, Surf Nazis Must Die and Class of Nuk'em High.
It has been a few years since I've watched a Troma offering, but seeing Mother's Day made me realize how they've changed over the years. I find their earlier works went more for shock value, whereas nowadays I think the priority lies more in the over-the-top gross-out. The rape scene in Mother's Day, though brief, showed a sadistic side that has all been erased from current Troma offerings. Even the original Toxic Avenger had one such scene, where Toxie's eventual love interest is ravaged during an armed robbery, but now Troma offers titles like Poultrygeist and Tales From The Crapper. They are entertaining in their own way, but surely not of the same stock. 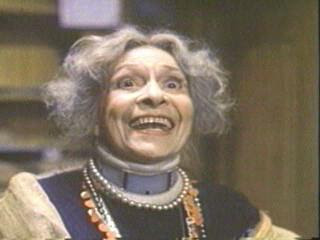 The gore in Mother's Day is pretty rudimentary, but displays a certain creativity that brought a smile to my face. I think what made the movie work, or at least be serviceable, were the performances of all involved. They all, whether they be the tormentors or the tormented, were fully invested in their roles, which often gave it – and I may sound silly for saying this – an air of credibility. 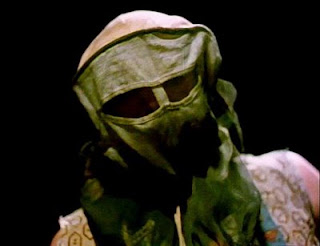 Though Mother's Day may not have the film making chops of other low-budget survivalist films like Rituals and Just Before Dawn, I doubt that was the kind of movie Kaufman's was shooting for. I will say that watching Mother's Day has made me want to check out some more Troma. There is this movie called Decampitated I've had my eye on recently.

As for Darren Bousman's upcoming Mother's Day remake, I am still undecided. I'm not really a fan of Bousman, but the cast assembled is impressive.
Posted by Jay Clarke at 12:35 PM