In keeping with the Loose Cannons Podcast, I recently re-watched the 1980 slasher New Year's Evil. 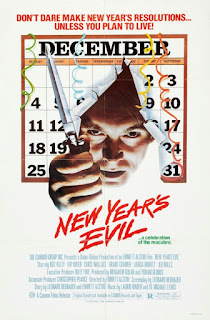 A psychopath (Kip Niven) leaves a trail of bodies on his way to a New Year's Bash celebration hosted by popular VJ Diane Sullivan (Roz Kelly). Will she still be alive at the stroke of midnight?

Now, I say re-watched, but I remembered very little of it, as this was another title that I saw through Elvira's Movie Macabre in the early nineties. As far as eighties slashers go, this is pretty low on the totem pole. The movie featured very little gore, was overly convoluted at times, and seemed to often forget that it is a slasher, like when the killer suddenly decided to start wearing a mask well into the last reel.

Having said that, New Year's Evil does have some entertaining qualities. The theme song was so catchy that the filmmakers decided to use it in its entirety a total of three times. The depiction of “New Wave Rock” culture was pretty laughable, as seen when the band was playing some weird blues-y riff and the crowd basically looked they were moshing to a ballad. It was also pretty amusing to see them try and fill the venue with thirty or so extras. You can actually hear the echoing emptiness of the room as they shuffle around.

I think the filmmakers were trying to create another slasher icon by naming him Evil, but he's actually kind of shit at his vocation. I admit that the idea of a guy who kills people every hour leading up to New Year's Eve – representing each time zone – was pretty cool, but the closer he got, the more he started mucking things up. I suppose I should say SPOILER here, but do you really give a shit? By the time he reached Diane Sullivan, and it was revealed that he was, in fact, her husband – I wonder if Nightmares in A Damaged Brain scooped this twist from here – the gig was pretty much up.

He proceeded to spew out some misogyny just before the cops showed up and he threw himself (or at least a poorly disguised mannequin) off the roof. The movie then ends with her son Derek (Grant Kramer), who has spent most of the running time doing all sorts of weird stuff with pantyhose, picking up where his father left off. As you would.

In complete contrast to the films of today, almost everybody in the movie is played by someone who is older than they should be. I think in that regard I prefer it the way it is today. It also had a scene in a Drive-In and I always like those. If I'm not mistaken, the movie playing may have been footage from an earlier Cannon release (The Lady In Red Kills Seven Times). There's a bit of free trivia for you. New Year's Evil isn't great, but it's serviceable, much like a lot of the horrors that were being churned out by this point in the early eighties.
Posted by Jay Clarke at 6:00 PM