Saturday Night At The Movies!

You may have noticed in my previous post that one of the films playing in town last weekend was Romano Scavolini’s infamous Video Nasty, Nightmare In A Damaged Brain aka Nightmare.
I’d been looking for this movie for over twenty years – Code Red’s long delayed release is still MIA and VHS copies sell on Ebay for upwards of a hundred dollars – so I couldn’t pass up this opportunity to see it. The Projection Booth is a nice little theatre, with ample capacity, a solid sound system and, perhaps most importantly, working air conditioning. 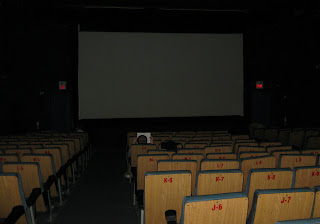 Before the screening, the programmer told us we’d be watching a DigiBeta, for which I wasn’t surprised because I'm not sure if a 35mm print of Nightmare even exists. The Projection Booth had been fortunate enough to have a duplicate made of one of the last remaining copies, as the master was apparently destroyed in a warehouse fire.
As expected, it looked pretty rough, but I what I wasn't counting on was seeing a hacked-up version. Even if I hadn’t previously seen the absent shots in Continental’s 1983 release Terror on Tape, I would’ve been tipped off by the fractured audio whenever things got bloody. It was troubling to be sure, but on the other hand; what’s my alternative? Watch it in pieces on YouTube? I don’t think so. 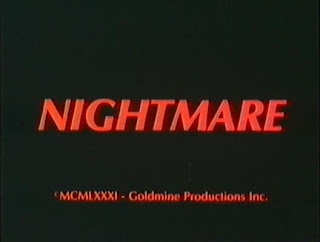 As for the movie itself, I’d say it fits nicely into the gore-centric slashers of that era, like Maniac and The Prowler. Although, by lacking the presence of someone like Joe Spinnell and any actual plot, Nightmare managed to be even more ghetto than its contemporaries. I also found it bore a strong resemblance to 1982’s Trick or Treats, or I guess technically vice versa. Perhaps Treats director Gary Graver was a fan and attempted to make a less sleazy, more coherent version the following year. Anyway, Nightmare’s threadbare story aside, it was still fun to chuckle to myself between all the gore set pieces. 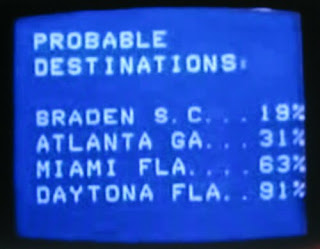 I'm not sure this computer understands how percentages work. 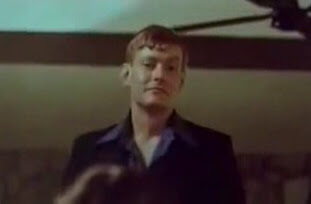 This is his killing face. 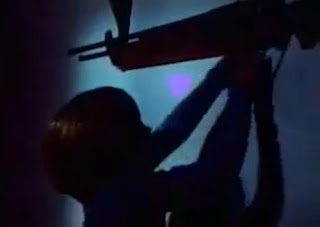 In case of masked killer; break glass.
On the subject of the gore, there has always been a lot of speculation about whether or not effects guru Tom Savini worked on this movie. His name appears in the credits, but he has denied on many occasions that he was anything more than a consultant on the project. Whatever story you believe, you can’t deny that the gore onscreen – the beheading especially – is very much his style.
So, even in its diminished capacity, I am still glad I finally got to see Nightmare and can cross it off my Video Nasty list. Now moving forward, anyone happen to have a copy of Axe they can send me?
Posted by Jay Clarke at 10:05 AM