I was perusing Ebay for vintage VHS a few weeks ago, when I came across a listing for a movie called Dark Tower. It wasn’t an adaptation of Stephen King’s sprawling saga, but rather a cheesy 1987 horror flick about a haunted skyscraper, shot in Barcelona. Upon further inspection I saw that the movie starred Jenny Agutter and Michael Moriarty. Uhh… Sold! Five dollars later, it was soon on my doorstep. 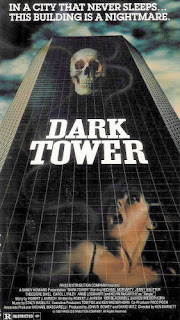 After seeing Moriarty in flicks like The Stuff and Q: The Winged Serpent, he has made loyal fans out of me and my small group of Toronto cinephiles. Dark Tower seemed like the perfect opportunity to meet up at DirtyRobot’s and see if this late-eighties offering was as good as its premise. Since he and I grew up watching films like Logan’s Run and An American Werewolf In London, there is a special place in our hearts for Ms. Agutter, as well. And in what seems to be becoming a welcome trend, DirtyRobot also cooked up a delicious meal for us. This time, it was chicken fajitas! 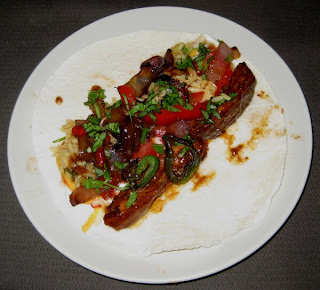 The movie was all right. It’s a bit of a missed opportunity, but it had its moments. Dark Tower has a very bizarre and stilted tone that often seems a little muddled. It is not particularly well shot, and it felt like a good deal of it took place inside an elevator shaft. And by that I mean, ample coverage of the elevator going up and down. When finally some poor sap did die in there, the editing left us wondering what the fuck happened? 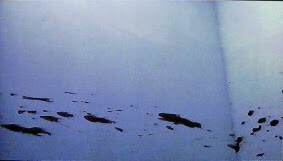 Is that blood or did someone spill their strawberry jam?
In all fairness though, according to Imdb, the director was replaced halfway through the shoot, so that might be the reason for all the head scratching. I will say that the score, provided by Stacy Widelitz, helps the movie considerably though. It has a very cool Prince of Darkness vibe to it.
Moriarty was still fun to watch, again walking into scenes like he’s in his own movie. It always seems like the other actors are following his lead, likely because they don’t know what the hell he’s going to do until the camera rolls. There was unfortunately a disappointing lack of him in Dark Tower though. Larry Cohen was aware of how much he brought to his films, so he used Moriarty liberally, but here his scenes seem dialed back. To the film’s advantage, he isn’t the only one yukkin’ it up in Dark Tower. Kevin McCarthy shows up toward the end as a beret-wearing quack named Sergie and Theodore Bikel, as Dr. Max Gold, has entire dialogues (or rather monologues) with thin air, trying to get El Poltergeisto to show itself. However, it is Agutter’s assistant who spouts the best line of the movie, when asked if she is married; 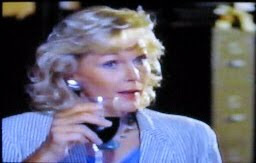 “No. I prefer to drink instead.”
So, Dark Tower wasn’t anything to write home about, but hey - it was five bucks! It may not have been a five star experience, but the aforementioned fajitas sure were! Another successful movie night, if I do say so myself.
Posted by Jay Clarke at 10:01 AM