Sunday night I finally got to see Troll Hunter, a Norwegian flick I'd been hearing about for quite some time. 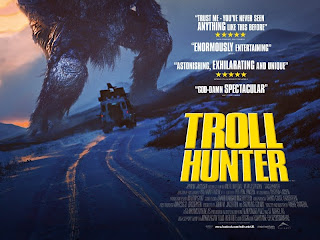 A camera crew investigating local bear attacks come across a hunter (Otto Jespersen) who takes them under his wing and shows them some bigger game.
Troll Hunter is a humongous amount of fun. I was under the impression that André Øvredal's movie was just a quirky Blair Witch Project clone, but it is more than that. While it employs the same “found footage” conceit, the tone is vastly different. Its goal is not to necessarily scare the audience, just keep them wholly entertained. The lore put forth in Troll Hunter is actually very clever and intricate. The heart of this movie is Hans, the title character. I listened eagerly as he revealed the secrets of his employers, the Troll Security Service and later saw him in action, as he dispatched many different species of troll. This made for several laugh out loud moments, as everything was always kept light throughout. 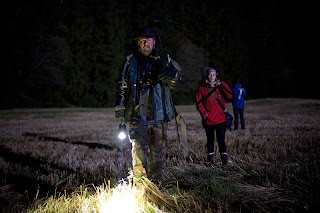 I was initially apprehensive about the extensive CG I knew would be in Troll Hunter, but it turned out not to be an issue. Not only did it look good, but as they weren't aiming to frighten, I was never taken out the experience. And like I said, because so many different creatures appear, it always seemed fresh and easy to swallow. It also didn't hurt that the sound design was absolutely superb. Every time a troll roared, it rocked the Hall Concordia.
The conclusion was somewhat abrupt, but movies of this type always seem to end the same way. Even with all the praise I'd been hearing from the festival circuit, I was surprised by how much I liked Troll Hunter. It is silly, yet smart and most importantly, never takes itself too seriously.
Posted by Jay Clarke at 7:51 PM