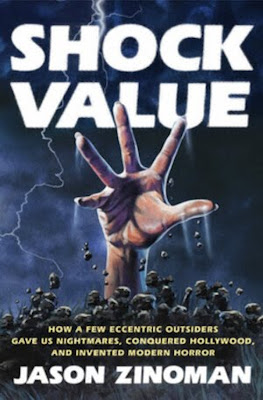 Shock Value, author Jason Zinoman's study on the transition of what he calls “old horror” to “new horror”, was a fun read. I found the top end a little dry, but it hits its stride when he really gets into the meat of his argument. I mean, clearly the classic films of Universal & Hammer are different from the flicks that terrorized the kids of my generation, but Zinoman pulls out some very precise examples. Perhaps the most telling tale is how the 1968 production of Rosemary's Baby was wrestled from the hands of schlockmeister Bill Castle and given to a young art house darling named Roman Polanski. This led to a shift in attitudes, where the restrained sensibilities of Alfred Hitchcock gave way to Herschell Gordon Lewis, whose motto was to leave nothing to the imagination. 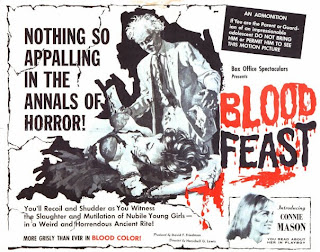 Shock Value does not only chronicle the ascension of “new horror”, but also the dozen or so filmmakers who ushered in the change. Zinoman features the early careers of horror icons like John Carpenter, Wes Craven, Tobe Hooper, Brian De Palma & George Romero. There is obviously a good chunk that is fairly common knowledge, but overall, Zinoman gives us thorough rundowns on how staple productions like Last House on the Left, The Texas Chainsaw Massacre, Carrie and Halloween came to be. The book also has a few other tangents, as well. The trend of political subtext within the films of “new horror” is explored and I particularly enjoyed the section on the history of horror magazines and how the genre bled into other mediums.
I have to say that I really appreciated that Zinoman made a point to single out Dan O'Bannon as one of his main subjects. He doesn't go so far as to say O'Bannon got a raw deal, but maintains – and rightly so – that he contributed as much to the era as any of the aforementioned, but isn't as highly revered. Shock Value covers O'Bannon's days at USC, where he and his classmate John Carpenter dreamed of pushing the boundaries of sci-fi films, as well as his prepwork for Alejandro Jodorowsky's adaptation of Dune. It may have never been filmed, but O'Bannon met artist H.R. Giger during the process and we all know where that led. 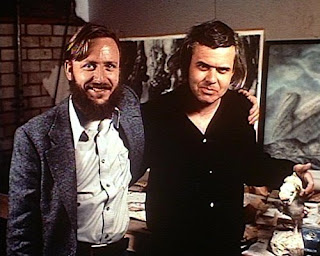 O'Bannon & Giger; the men behind the Alien.
There were several very interesting stories within about how certain life-changing events shaped a director's art. Why was Brian De Palma so fixated on voyeurism in his films? Where did O'Bannon come up with that unforgettable scene in Alien? Shock Value answers those questions and reinforces the old adage, “write what you know.” Do that, and it will always be true. I would have liked more photos in the book, and I did find a few distracting inaccuracies within, but I'm just nitpicking at this point.
Shock Value is a decent read, that informs and entertains for the most part. It can be a tad clinical at points, but it is well worth your time if you are a fan of the genre. But, it begs the question; when will the next era emerge? The kids who cut their teeth on “new horror” are all grown up now and making their own nightmares, but I'm not convinced that the work of men like Rob Zombie, Eli Roth and Adam Green will be anywhere near as revered in thirty years time. I guess we'll just have to see what claws its way to the surface.
Posted by Jay Clarke at 8:00 AM

Interesting point about the "new era" - guess we'll just have to wait and see.

Thanks for being on the tour!

My pleasure, glad to spread the word!