Next up in my Fantasia lineup was Andrew Trauki’s The Reef. I had previously raved about his 2007 film Black Water and anticipating his follow-up for quite some time. 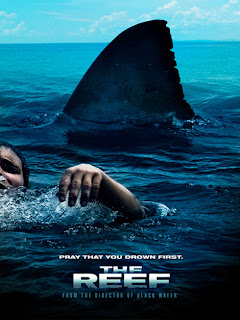 A Great White shark stalks a group of friends shipwrecked off the Great Barrier Reef.
I have mentioned before that there is nothing more frightening to me than sharks. When I saw 2003’s Open Water, I was catatonic for a good number of hours afterwards. The idea of being out in the ocean helpless, with those things swimming around… well… Anyway, that fear, that tension, that rush, if you will, is the reason I watch horror movies in the first place. There are so few genuine scares out there, but I know killer shark flicks will almost always deliver. Some people might say, “Oh, I couldn’t watch that.” I say, “I have to watch that!”

:o
The Reef plays out very much the same way as the aforementioned Open Water, but is a little more theatrical in its presentation. Leaving the plot threadbare, Trauki concentrates all his energy on feasting on our primal fears, and he is very, very good at it. He holds onto the tension for as long as humanly possible, with ocean level angles and sustained underwater shots looking out into the murky depths. It made me want to lose my mind at times. Granted, this causes long periods of time where nothing much happens – which bored my cohorts to tears – but all I had to do was imagine myself in that situation and I’d break out into a cold sweat. I know I'd side with ol' Warren on this one; 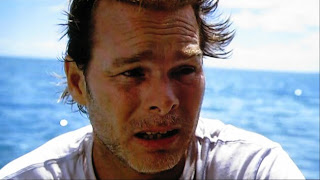 “I'm not gettin’ in that water.”
When the shark does show up, it is a malevolent beast. The shots where it slowly turns toward the viewer made me tense every muscle in my body. Technically, I didn’t think the effects – a very advanced style of compositing – were quite as seamless as they were in Black Water, but considering this was a step up in concept, they were still pretty awesome.
I found this movie terrifying, but it is also a visual representation of my worst nightmare. If swimming with sharks is on your bucket list – hope it’s the last thing to cross off – then I suppose The Reef may seem pedestrian to you. All I know is that I will be surprised if there’s a horror film this year that affects me as much as this one did.
This post can also double as an “On The Shelf” entry, as The Reef releases on video this week. Go check it out!
Posted by Jay Clarke at 6:00 PM