The TIFF Lightbox has been putting on some really awesome stuff of late. In addition to the ongoing Best of Midnight Madness series that I've mentioned before, they also had a free screening of Black Christmas on Canada Day. 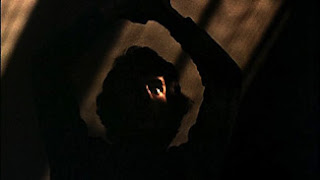 “Up yours Frosty, this is the real Christmas in July!”
In conjunction with the Federico Fellini exhibit showing at the Lightbox, there is also currently a programme called Dream Double Bills. Nine people in the film industry, which include TIFF programmer Noah Cowan, and actress Isabella Rossellini, paired up a work of Fellini's with another film that was either of influence or similarity. The double bill for which I was there, was Fellini’s Toby Dammit, his contribution to the 1968 Poe anthology Spirits of the Dead, and Dario Argento’s Suspiria. To sweeten the pot, director Guillermo Del Toro was on-hand to intro the films, and then engage the audience in discussion afterward.

Fellini is a name I am obviously aware of, but his films are little more than titles to me, so seeing Toby Dammit was quite a treat. Clearly, Fellini is yet another filmmaker to have been influenced by Mario Bava. Putting aside the ubiquitous image of the devilish little girl, something that has since become a go-to horror trope, just the overall palette of the abstract evokes the work of sixties Bava. It was also cool to see a young Terence Stamp as the title character. Growing up as a child of the eighties, Stamp left an indelible mark on me, as the sadistic General Zod in Superman II. It is always interesting to see these veteran actors in earlier roles, especially when they are as broad and freewheeling as Toby Dammit’s is. 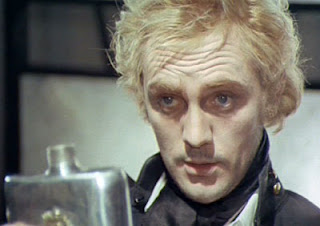 Without a break, we drifted into the dark and nightmarish world of Suspiria. I’ve spoken about this film before, so I don’t have much more to add here. It’s the Mona Lisa of art-house horror and is one of those special films that exists because its director was not concerned with adhering to convention.
The talk afterwards with Del Toro was great stuff. Anyone who has seen him speak, knows what a jovial soul he is. He is just sincerely passionate about film. He spoke at length about the Fellini and Argento’s similar attitudes when dealing with the surreal. They both had a “free-form” style. Though it seems Fellini was more concerned with rooting his characters in reality. You could even make the argument, as del Toro did, that Argento considered that largely unimportant. Suspiria only falters when it attempts to bring method to the madness, for the exposition scene with a young Udo Keir and Rudolf Schündler does stick out when compared with the feverish tone of the rest of the picture. 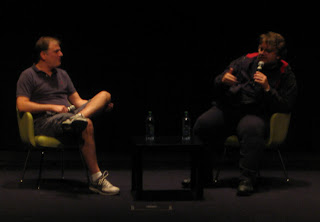 TIFF Programmer Noah Cowan & Guillermo Del Toro.
When asked to talk about the parallels between Suspiria and Darren Aronofsky’s Black Swan, Del Toro was eager to share his thoughts. He spoke of those two titles and Satoshi Kon’s 1998 animated flick Perfect Blue as being a demented trinity of films that use the performing arts as a jumping off point into the dark depths of insanity. He found it fascinating that a profession that involves complete control was paired with characters who may or may not be losing it.
Someone also asked Del Toro what he dreams about. He replied that for the most part, they are pretty boring, but he does have two recurring nightmares, where is he either being chased by zombies across rooftops, or attacked by sharks. He even said that after reading Junji Ito’s Gyo, the two dreams occasionally meld together. I can relate. Sharks with legs are probably the most terrifying thing I can think of.
Here below, is some video I took, as Del Toro responds to being asked what he thinks of Argento's follow-up to Suspiria, Inferno. Apologies for the shaky-cam toward the end, it's hard to hold a camera steady when you're laughing your ass off.

So, as you can see, it was worth the twelve dollars. Del Toro is here in town indefinitely while working on Pacific Rim, so he may drop by the Lightbox a few more times in the future. I look forward to it.
To see video of Del Toro's introduction, courtesy of YouTube user mediapartyvideo, click here.
Posted by Jay Clarke at 10:02 AM