All right, let's see what I've got for you today.
What's In A Name?
Something nifty I came across last week was this B-Movie Name Generator over at Hanttula.com. Just go here and be entertained by one of 253,440 colourful title combinations. I'm not ashamed to say that I'd be interested in seeing a good number of these at my local movie house, including the one below;

The site generates a new title every few seconds, so it is a great thing to have open on your desktop. Every time you need a smile at your desk, clickity click and you can imagine what "Night of the Savage Jungle Girls" would look like, if you directed it.
Two More Dates With Fear.
Rue Morgue's Festival of Fear, Toronto's yearly horror convention just announced two more events this week. 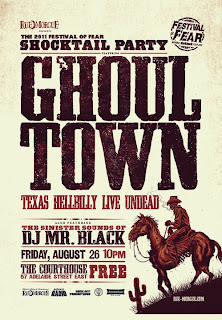 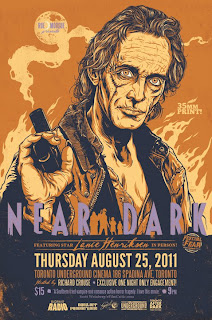 The Rue Morgue parties are always a gas, so you can be sure that is where I will beeline after the Dream Warriors screening. The Near Dark event will be awesome, as well. Judging from Henriksen's appearance at FOF two years ago, I got the feeling him & Bill Paxton got into a lot of shinanegans while shooting that flick. I can't wait to hear all about it from Lance himself. The Festival of Fear runs August 25-28 this year at the Metro Toronto Convention Centre. For more info, click here.
Ten-Minute Black Hole.
Here below, is a 2007 short film I came across a few weeks ago, while catching up on what is happening with the film adaptation of Charles Burns' comic Black Hole. Even though this short is an obviously abbreviated version of the tale, director Rupert Sanders does a lot of things right in capturing Burns' wildly askew universe. If you haven't read the comic, I suggest you do so, as it is really quite hypnotic. Click on the image to be redirected. 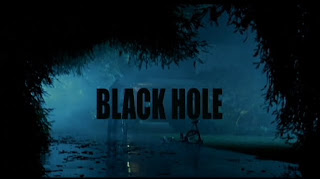 Is it just me, or are chicks with tails kinda sexy? Oh shit, did I just say that out loud?
Posted by Jay Clarke at 12:29 PM