I'm going to finish off my Fantasia reviews with the pair of British thrillers I caught during the tail end of my stay. 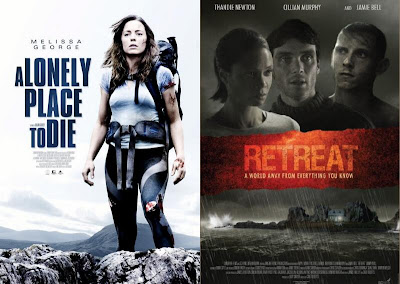 The first film was Julian Gilbey's A Lonely Place To Die, which is about a group of five friends mountain climbing in Scotland discover a young Serbian girl buried alive in the wilderness.
The first half of this movie really had me. It features some fantastic climbing sequences, well-executed stunts and a real desire to make the action as authentic as possible. Technically, this movie is a marvel, with sound design that augments everything onscreen. Unfortunately, about halfway through the movie, it morphed from a solid survival flick to a fairly standard crime film that wasn't nearly as engaging. A whole whack of characters were quickly introduced and suddenly this thriller with a delicious premise became way overcomplicated, and everything suffered as a result. 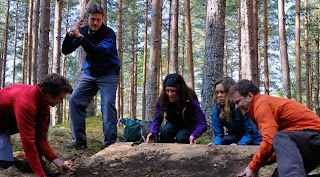 At the Q&A, Gilbey made a point of mentioning that he wanted to root his story in logic because too many action movies downplayed the importance of realism and yet he still managed to fall into many of the same pitfalls, including supposed professional killers who can't hit a barn with high powered rifles and a broken leg that seems to miraculously heal itself.
I don't want to be too hard on the movie, as I do like Melissa George and she certainly seemed up to the challenge of the very physical role, but A Lonely Place To Die ultimately struggles to sustain the quality of its strong setup.
Moving on, the last film I saw while in Montreal was Carl Tibbett's Retreat.
Kate & Martin (Thandie Newton & Cillian Murphy) travel to a remote island cottage to try and heal their troubled marriage. One morning, an injured man (Jamie Bell) appears bearing news of a catastrophic event on the mainland.
Retreat had a promising premise very much like 1989's Dead Calm, with the isolating agent being an island instead of a boat. Unfortunately, I found the movie as a whole to be kind of flat. Like A Lonely Place To Die, Retreat has a fine first half, but then fizzles, albeit, this time for a different reason. While Gilbey's film turned into in an undesirable direction, Retreat seemed to stay at the same tempo for the duration. And when it had all played out, I found myself looking back and puzzling at a lot of the character's actions. 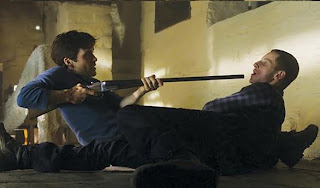 Tibbetts assembled a solid trio of talent for his project – and I do commend him for casting them against type - but it is a shame that he couldn't get them something a little more interesting to do. It is not a total waste, but this movie has been done better on more than one occasion. Even going beyond Dead Calm, J Blakeson's 2009 film The Disappearance of Alice Creed was far superior in almost every way. It had an energy that seemed to grow with each new reveal. While it is true that Retreat had its fair share of twists, they never seemed as satisfying. I think my biggest issue, especially toward the end, was the overbearing score. I have no idea why Tibbetts chose to be so on-the-nose with it, but it made the last few dramatic moments almost comical.
Retreat is a serviceable thriller, but I just wish it was something else and not a mash up of better films.
So, not an ideal finish to the trip, but my 2011 Montreal excursion was still a blast. Fantasia is a great festival environment, where you can rub elbows with filmmakers, actors and other attendees. My favourite moment was sitting with Richard Stanley on The Irish Embassy patio as he performed tarot card readings. It was amazing to be in the presence of such a born storyteller.
Posted by Jay Clarke at 5:24 PM

In reference to what you said about A Lonely Place to Die, I saw a French film fairly recently that did the exact same bait-and-switch on us called High Lane. The first half was this really interesting mountain climbing survivalist pic, then halfway through it figured it was too good and transformed into an annoyingly generic "backwoods mutant cannibal kills teens" flick. Boy was I pissed.

Bummer, though to be honest, I think I'd have been more happy with "backwoods mutant cannibal killers"