This week’s distributor is a big ‘un.


I was hoping for a jingle there, but oh well. Continental Video was one of the premiere purveyors of gore and sleaze in the eighties, so it’s no wonder a good number of their titles, like Nightmare, The Slayer, Frozen Scream and Blood Feast, ended up on Britain’s Video Nasties list. Continental also released horror titles under the banner of Comet Video for a time, as well.


When I said big ‘un earlier, I not only meant their significance to the home video market, but also their merchandising. Continental was known for their “big box” packaging. You could immediately spot their wares on store shelves, even before you were close enough to make out their gruesome covers. They also released some of their titles as double bills, with two of their movies on one tape. The above intro was culled from this recently acquired two-pack of The Slayer and Scalps. 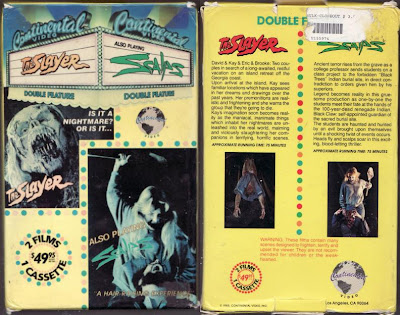 It’s busted up to hell I know, but how fucking cool is that? It just arrived on Tuesday, so I’ve only watched the first ten minutes, but it’s pretty rough. The two features are each cut down to seventy-five minutes to fit onto one cassette, so lets hope it’s not the gore that got axed. Even so, just the sweet packaging is worth the fifteen bucks I paid for it.

Another infamous Continental Video title was Terror on Tape. In an attempt to push their product, they produced what was basically a clip show of gory moments from their back catalogue. Bloody snips from titles such as Return of the Alien’s Deadly Spawn, City of the Walking Dead, Blood Tide, Ruby and H.G. Lewis’ Blood Trilogy were shown alongside scenes – shot on video in likely an afternoon – of Cameron Mitchell hamming it up as a video store clerk serving customers looking for scary movies. Here's a clip below, courtesy of YouTube user MrBBJane, featuring Mitchell and scream queen Michelle Bauer.


God, that brings back memories. I think I first watched this movie at a sleepover, along with Jim Hanley's Junior. Good times.
Posted by Jay Clarke at 10:04 AM