Last weekend, I attended the fourth edition of LEFT (Lost Episode Festival Toronto) to catch a screening of Babak Anvari’s Under The Shadow. After its successful showing at Sundance – and my missing it at Fantasia – I was very excited to see what all the fuss was about. 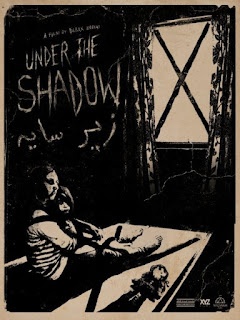 Tehran, 1988. Shideh (Narges Rashidi) must not only protect her daughter Dorsa (Avin Manshadi) from the constant bombing attacks, but also a supernatural force that has set up residence in their tenement complex.

Under The Shadow was an excellent film. I had expected to enjoy it, but I had no idea it was going to be such an exceptionally well rounded piece of work. Everything about this effort was top notch, right down to the eighties production design. Although, the themes were so timeless, it could’ve just as easily been set in present day.

I’d heard about the comparisons to 2014’s The Babadook and they are valid, as both tales involve a mother and child, supernatural forces and have metaphorical underpinnings. However, Under The Shadow was far less flashy, and I believe that worked in its favour. A lot of The Babadook’s appeal was in its visual style and production design, whereas this relied solely on its characters. I also saw shades of 2002’s Dark Water in here too, but this was way more articulate and affecting.

The way Anvari was able to convey so much about the political climate and attitudes in such a short time was really impressive. Using the tenement building in which Shideh lived as a microcosm of Tehran itself, where communities were orphaned of their able-bodied men through conscription, was really interesting to me. As her complex emptied out, she and her daughter became more vulnerable to the unknown force lingering inside.

The more I think about it, the more I appreciate how well it all linked together. Rashidi was terrific in this film, and her character was extremely well written. It wasn’t a surprise to see that she was credited as a writer, as there was a perspective here that no man would have been able to duplicate.

As a genre film, this movie packed a punch due to its double-pronged approach. It had several conventional scare moments, including one or two well conceived jump scares, but there was also an underlying sense of dread throughout. Imagine living in a place where you could be blown to bits at any moment. Anvari used this to full effect by making even the most mundane scenes thick with tension. There was an early scene where Shideh was talking on the phone, but the shot was a lot wider than it needed to be to frame in the large window behind her. All I could do was stare at it, sure that an explosion was going to shatter it at any moment. Tremendous stuff. 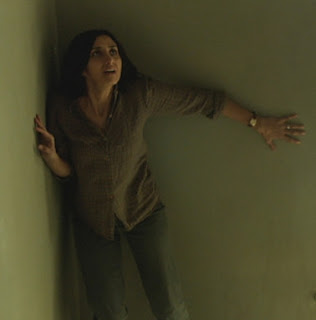 I was also pleased that there was limited CG used in the film. The scares, for the most part, came from the threat to the main characters, and that’s how it should be. And thankfully, Anvari didn’t go for that one last jump scare, something that’s almost required in North American scare flicks these days. Under The Shadow was highly effective and concentrated on all the right elements that make a great horror film.

Lastly, I just wanted to give a shout-out to Johnny Larocque and LEFT for an impressive line-up this year. They may not be as visible as some of the other genre fests in Toronto, but with the acquisition of high profile titles like Under The Shadow, they soon will be. Excellent job, guys!
Posted by Jay Clarke at 10:00 AM

I heard that you guys in the flyer and advertising sector are reaping the rewards of a booming business.

You might want to consider investing in an opportunity that horror fans will pay big money for in the future: the Alien motor bike