A movie in the mainstream horror stable that I’ve been excited about for some time is Fede Alvarez’s Don’t Breathe. I've started shutting off trailers as soon as I decide I'm going to see the film, so I knew pretty much nothing about this one, except its setup. It looked solid, though after Lights Out I made sure to keep my expectations tempered. 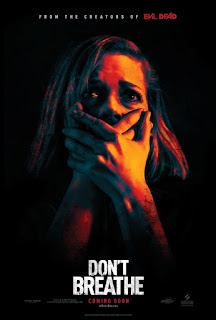 An easy score turns into a life-or-death struggle for three petty thieves (Jane Levy, Dylan Minette, & Daniel Zovatto) when they break into the house of a blind army veteran.

Don’t Breathe was a strong piece of work that kept a remarkable pace once it got going. Alvarez decidedly has a knack working in confined spaces, as the camerawork here was on point, especially during the “one-r” sequence when the thieves were investigating the house after they broke in. I thought the movie flowed well from set piece to set piece and I was with it pretty much from the get-go. Using Detroit as a backdrop certainly added to the atmosphere, as well. More filmmakers should film there because at this point, it looks like a horror film by itself.

It may be no surprise that the highlight of this movie was the menacing presence of Stephen Lang as the blind vet. He may be old, but that house was his domain. He always seemed like he was in control, and all these thieves were doing was making him more angry. When the movie took a turn in the second act, he became even more diabolical. Man, it really is so much easier to sell your antagonist when you don’t have to rely on CGI. 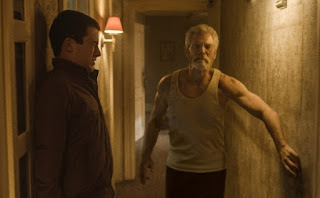 I found the production as a whole a step up from the Evil Dead remake. I remember my first uh-oh moment during that movie when they flashed back to something that had happened mere minutes before, as if we weren’t smart enough to remember it. Don’t Breathe was much more confident storytelling and the emphasis on visual narrative was extremely effective. And by visually, I mean that the audio was often scaled back. Not every sudden scare had bombastic accompaniment. It knew when to be quiet to prolong the tension.

Unfortunately, I cannot say the same for the two fucking idiots sitting next to me in the theatre. I so wanted Mr. Blind Guy to reach through the screen and strangle those bitches. Seriously, can you not just sit still for ninety minutes without feeling the need to open your fucking mouth??? But I digress. 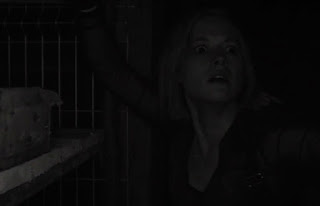 Don’t Breathe was definitely one of the best titles that Ghost House has released to date. It’s taut, tense and went to places I wasn’t expecting. Studios take note. More of this, and less of Rings and/or Ouija.
Posted by Jay Clarke at 6:00 PM