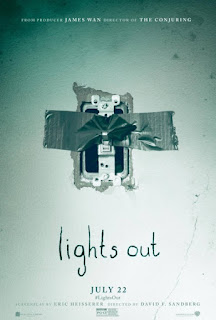 Rebecca (Teresa Palmer) re-enters the lives of her estranged family when her half-brother Martin (Gabriel Bateman) tells her that a spectral presence is endangering him and his increasingly unstable mother (Maria Bello).

I was pulling for this movie as it evolved from an excellent two-minute short film. Unfortunately, as a feature length effort, it didn't pack the same punch. Don't get me wrong, there were a handful of solid set pieces, but often the premise was more frightening than the actual execution. The stay-in-the-light plot device was effective, but I don't know that it really added anything that wasn't explored in titles like Darkness Falls and Pitch Black from the early 2000's.

I cannot fault the performances, as they were good top to bottom, but the dramatic beats felt a little forced at times. Lights Out also sadly fell into the trap of spoon-feeding exposition. I can't not roll my eyes when scenes start out with awkward lines like, “so your mom was in a mental hospital.” A similarly-themed film like 2013's Mama (also coincidentally birthed from a short film) resonated more with me because I was invested in the characters. However, unlike Mama, Sandberg kept the movie from becoming a CGI shitshow. He employed as many practical effects as possible and that was something I really appreciated. 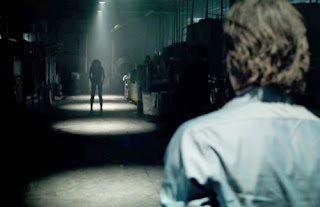 I also liked that the opening scene of the movie was essentially lifted from the short film and built from there. Sandberg even used the same actress, (Lotta Losten) and keen eyes may have caught a familiar doll in the boss's office. It made for a nice bridge between the short and the feature. When Lights Out worked, it really worked, but it was barely a movie otherwise. It's certainly watchable and stacks up against other mainstream fare out there, but I was hoping for something more substantial.


Mainly, I do want to say good on David F. Sandberg for turning his two-minute festival competition piece into a feature deal. It gives hope to the rest of us that if you can come up with a really great idea that the horror community latches onto, the future can be very bright indeed.
Posted by Jay Clarke at 1:57 PM