Tuesday evening, I checked out the Polish mermaid flick, The Lure. 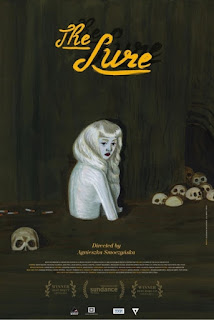 A trio of musicians working in a nightclub come across two mermaids and incorporate them into their act. However, their transition into everyday life is not without its challenges.

During his intro, Fantasia programmer Mitch Davis stated that there was nothing quite like this film out there. And boy, was he right! I mean, on the surface it was an adult retelling of The Little Mermaid, but director Agnieszka Smoczynska injected so much of herself into this effort (her mother ran two restaurants when she was a girl) it became an entirely new organism. I am so impressed by how much confidence she had, both narratively and technically, in this debut. 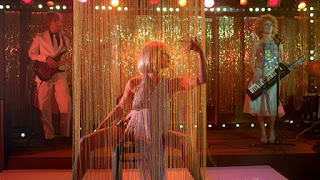 And it's a musical! Yet, perhaps even more admirable is that these musical numbers were so catchy and appeared so organically, I was at no point sorry or annoyed that the characters were breaking out into song. The entire cast was strong, but the two mermaids Golden (Michalina Olszanska) & Silver (Marta Mazurek) were absolutely stunning. The Lure was soaked in sexuality and a good majority of that was the icy and inviting looks from these two women.


Everything came together perfectly in this film. It was delightfully colourful and every frame was laced with the personality of its creator. Needless to say, I thought this film was super great. Upon first glance, it may not seem like The Lure is your bag, but I implore you to check it out, because it is so, so much fun.
Posted by Jay Clarke at 10:02 AM