This Spring saw the release of the book My Best Friend's Exorcism, the newest piece of fiction from author Grady Hendrix. I was a big fan of his last book Horrorstör, so it didn't take me long to track this down. 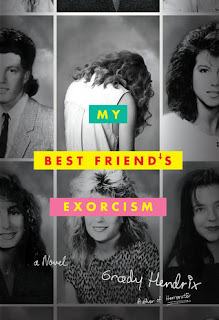 Abby & Gretchen have been inseparable since they were ten years old. But ever since that night during sophomore year when Gretchen got lost in the woods, she's been different. Is it hormones, or is something more otherworldly to blame?

Hendrix has spun another solid tale here, using the same tools that made Horrorstör such a great read. He took a tried-and-true trope – the demonic possession story – and used his colourfully visual storytelling to put it within the context of something commonplace, though arguably just as tumultuous, the life of a high school student.

Also like his previous work, the presentation was top notch and added a lot to the story. In addition to the book jacket resembling a high school yearbook, the chapter headings were all eighties song titles that directly related to the words that followed. It's such a clever device, and it made me smile because I'd hear the song – whether it be We Got The Beat, Missionary Man or I Think We're Alone Now – in my head when I began each chapter. 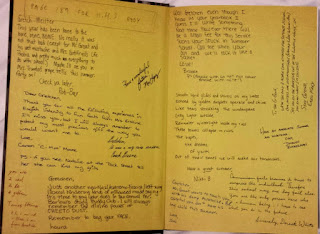 That's one of the main reasons that I loved that My Best Friend's Exorcism was set in the eighties. It gave me that extra layer of relatability, but it also felt right for the story that it took place during the Satanic Panic of the Reagan era. There's an inherent readability to this book that reminded me of the heyday of Christopher Pike and R.L. Stine. Their books followed a formula, but like Hendrix, they engineered universes with life and flourish. While doing some research on Hendrix, I discovered he had previously co-authored a YA series of called The Magnolia League. That makes so much sense in hindsight.

That's not to say that this book was all together tame, as there's some nightmarish imagery within. I am certainly glad I already didn't like milkshakes... Mainly though, I just responded to the through-line of a lifetime friendship being tested. It made me think of my oldest relationships and how I should make an effort to keep them from fading away to nothing.


Yeah, I liked My Best Friend's Exorcism. Hendrix continues to find magic and malevolence in the most mundane areas of life, and I'm definitely eager to see what dark corner he travels to next.
Posted by Jay Clarke at 10:00 AM