Next up, was the highly anticipated supernatural tale from South Korea, The Wailing. 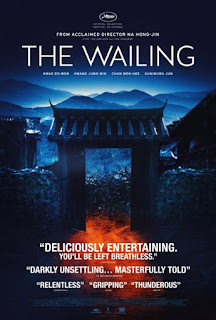 Random acts of violence in a small town have the constabulary baffled. When the daughter of head investigator Jong-Goo (Do Wan Kwak) starts to exhibit the same symptoms, he races against time to find the cause.

This is a strange review to write because I feel like this one now will be a lot different than the one I would have written yesterday. Both past and present me would have said it was a solid movie, but the former would have said its overwhelming Cannes buzz was a tad overrated. But let's back up.

The Wailing has that mix of comedy, horror and drama that is uniquely Korean. It reminded me a little of 2006's The Host, in that the family is the narrative strength. Director Hong-jin Na spends a good amount of time getting you invested in them so that when the supernatural element is injected, you actually care about their fate. The performances were great all around. There are a lot of scenes that required extreme emotion, especially from the young daughter (Kim Hwan-hee) and she was a force to be reckoned with.

The first half was very enjoyable, but it started to get a little muddled the longer it went on and was not helped by its hundred-and-fifty-six minute running time. After watching the film, there were a lot of things that didn't add up for me. After doing some research, I filled in some of the blanks, but that's not really an ideal scenario. I mean, I like to think that I'm not an idiot, so if I have to have an important misdirection explained to me, I choose to put that on the film. But, I (kind of) get it now, so everything's cool.


Overall, The Wailing is a fine film, but don't feel bad if you find yourself scratching your head afterwards about the details.
Posted by Jay Clarke at 1:15 PM