Hope you are all enjoying your weekend. Here's what I've got for you this time around.
Hail To The King, Baby. 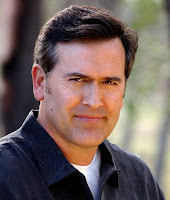 Bruce Campbell, of Evil Dead, and more recently Burn Notice fame, turned fifty-three last Thursday. Over the past three decades, Bruce has amassed a colourful body of work and a legion of loyal fans. I still get a chuckle every time I see him in the back seat of that Oldsmobile, at the beginning of The Evil Dead. He looks so impossibly young in that movie. They all were, and that's part of the reason that film is as important as it is. In keeping with that, he's an early short from the Renaissance Boys called Cleveland Smith: Bounty Hunter. Special thanks to YouTube user BloodyDreamer for putting this up, as it saves me having to capture it off my old VHS copy. Happy Birthday Bruce!

More Links!
I found a few more cool websites last week, that I wanted to share here.
VHShitfest, and its companion Tumblr site VHShit-Scans, is a wonderful collection of VHS titles from days of yore. Run by two dudes named Tim May & Dan Kinem, VHShitfest features reviews, scans and unboxing videos of vintage VHS from all genres. Their latest review is for the 1989 revenge flick Hell High.

Another great VHS archive blog is that of Vestron Dan. He collects VHS and scans from anything released by, you guessed it, Vestron Video International. His collection now numbers in the hundreds. Click here to check out the site.
Last up, is something I saw on Fatally Yours. Camp Motion Pictures is releasing a Big Box collection of rare 80's gore flicks this September. In addition to a whole whack of special features, the set includes five crusties, including The Basement, Video Violence and Cannibal Campout. Here below, is the trailer.

T Is For...
I just heard about this on Thursday, and it sounds amazing. Tim League of the Alamo Drafthouse and curator of the Fantastic Fest film festival, is putting together a film project called The ABC's Of Death. 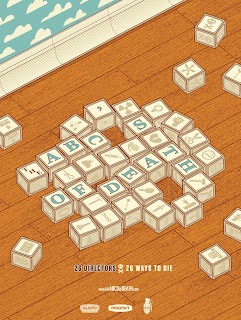 But Jay, you say, that's only twenty-five names. There's twenty-six letters in the alphabet! Well, here's the kicker. League and company and reaching out to us for the twenty sixth short, or more specifically, the letter "T". Get your submission in by October 1st, and the top ten will be posted online. The winner will then be determined by the filmmakers above and be included in the movie. How cool is that??? I am seriously thinking about entering this. For more info on the contest, click here.
Okay, that's all I got. Now, I'm off to the couch to spin through the first season of this Game of Thrones show everyone's been raving about lately.
Posted by Jay Clarke at 9:31 AM

DVD format has been going strong for almost 15 years. You're obvioiusly a fan of VHS, but is that because you can only find certain older titles on tape, or is it just the estheic?

If there was a genre that would be less represented on digital, I would guess horror, as it's not as mainstream and lucrative to transfer old titles. Any study ever done on what % of VHS movies never made the transition?

Hey, don't get me wrong, I love me some Blu-rays! But there is a lot of nostalgia tied up in VHS. And yes, there are still hundreds of genre titles that still have yet to get the digital treatment.