Toronto's Black Museum lecture series returned after a long hiatus with a one-off screening a few weeks ago. Curators Paul Corupe & Andrea Subissati took over The Royal to screen, rather fittingly, the 1959 film Horrors of the Black Museum. 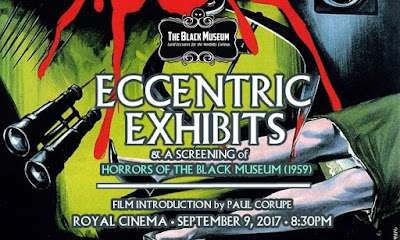 I was really excited to see this film because it has special significance to me. Growing up I learned pretty fast that my mother had - and still has - zero tolerance for onscreen violence. My predilection for horror and all things macabre was fostered solely by my father. Anyhow, the conversation eventually arose between my mother and I about why I liked that stuff and why she didn't.


I got an earful about the horrible pictures that my Dad had taken my Mom to when they started dating circa 1960. She was scarred by Psycho, but the one movie that seemed to do the most damage was one she couldn't even remember the title of. All she could remember were two harrowing scenes - a bit where a woman went to look through a set of binoculars and spikes shot out into her eyes, and another where a guillotine came down on a lady lying in bed. 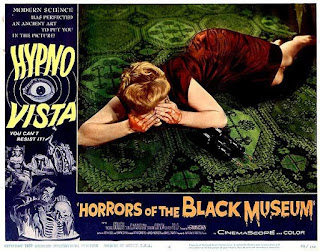 My mind played with these delicious images, but this was long before Google, so it was twenty years before I even discovered which movie these scenes appeared in. Even when I did, the film wasn't high on my list of priorities while I was being deluged with new titles each and every day. So, imagine my delight when I saw The Black Museum would be playing its namesake?


This was a fun event. Paul did an introduction where he talked all about the history of curious collections throughout the ages and the creation of the original Black Museum at Scotland Yard. He then movde onto their influence on film and the many horrors that have featured museums and sideshows over the years.

As for the movie, I thought it was a hoot. I was surprised to find that the binoculars bit was the opening scene. My poor mother! She must have been like, “that was awful and I still have a whole movie to sit through!” The movie is obviously tame by today's standards, but I do love the deliberate pace of these British dialogue-driven pictures. All the little quirks had me grinning from ear to ear, like one scene where a kid spends an entire scene eating a banana just left of frame. She then just tosses the peel over her shoulder when she's done. Nothing beats the ending though. In the middle of a carnival as two people have just been violently killed in front of a crowd, the cops say their piece and then, as the camera zooms out, the Ferris wheel starts up again and everyone unceremoniously goes about their business. Classic stuff!


So after the thirty-five years of waiting to see this film, I learned one thing. My Mom must have really liked my Dad.
Posted by Jay Clarke at 10:00 AM