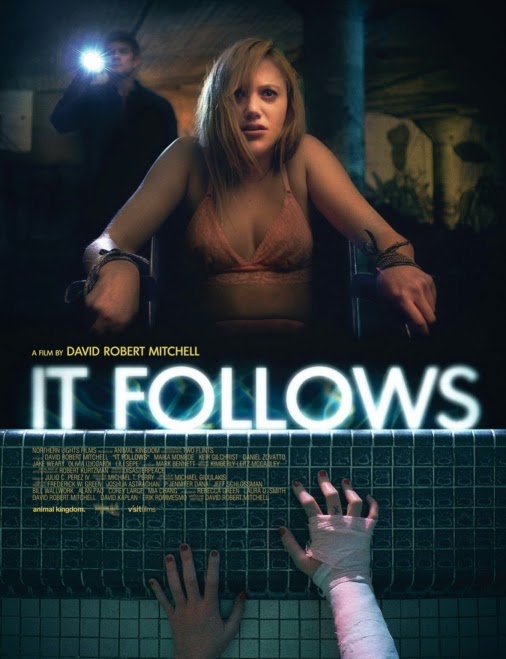 After having sex, Jay (Maika Monroe) begins being haunted by a malevolent spirit. Fortunately, she can save herself by passing it onto someone else the same way she received it.

When I was kid, whenever I heard my own heartbeat – usually when I was in bed with a pillow over my face – I would imagine those thundering beats were the footsteps of “Death” on his way to claim me. I would never know how far away he was, but sooner or later he'd catch up to me and I'd be done for. I was reminded of this childhood memory while watching It Follows.

Horror is a genre that, for sometime now, has not fostered originality, but somehow, thankfully, Mitchell managed to bring this one into the world. We only get one or two horror films like It Follows a year, if we're lucky, and what I find truly remarkable is that you can explain the premise in a few words – “it's about a haunted STD” – and not only marvel at the idea itself, but also how no one had thought of something so simplistic before.

Beyond the premise, the mechanics of which was well thought out and not overexplained – a choice of which does not become somewhat problematic until very late in the film – there are a lot of things that make this piece stand out. The cinematography was excellent and really showcased the more dark and drizzly landscapes of both urban and suburban Detroit. There was also a timeless quality to the film. Apart from an E-reader carried around by one of the supporting characters there was really no indication as to what decade it was supposed to take place in, especially since all other media absorbed by the characters – on television and at the cinema – was of the vintage variety.

Monroe is very strong as the embattled protagonist, Jay. Much like Amber Heard's turn in All The Boys Love Mandy Lane eight years ago at Midnight Madness, Monroe is a real breakout here, with not one but two films (Adam Wingard's The Guest being the other) in 2014's Midnight line-up. However, as good as Monroe was, the real star of It Follows was the soundtrack provided by California-based musician Disasterpiece. He had worked primarily on video game scores, most notably the indie darling Fez, until Mitchell reached out to him. The result was tremendous, adding so much substance that its inclusion elevated the film from being solely a weird cautionary fable to full-on horror flick.


Though the third act is not quite as strong, revelling more in visuals rather than logic to drive the story, the delicious premise and spectacular score are more than enough to glaze over those shortcomings. For all those jaded horror fans out there that think modern horror is nothing but recycled garbage, I urge you to give It Follows a whirl.

*Q&A photo courtesy of Robert Mitchell.
Posted by Jay Clarke at 10:00 AM