Perhaps my most anticipated film of this year's Midnight line-up was Jaume Balagueró's conclusion to the [REC] series, Apocalypse. 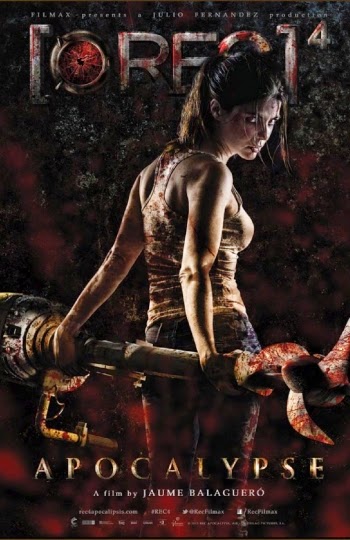 Soon after Angela (Manuela Velasco) is rescued from the apartment complex and quarantined in a laboratory set up inside an oil tanker, the outbreak begins anew.

For [REC]4, Balagueró abandoned the found footage narrative and the result is both a blessing and a curse. It had to be done as, save for a few exceptions, this format has run its course, but I felt that with that element gone, a lot of the series' identity went with it. There was a level of intimacy in the first two pictures, that was, for the most part, not present here. The locale of the oil tanker was just as claustrophobic as the tenement building, but something in the change of how the story was presented lessened the effect.

Balagueró attempted to mesh two genre favourites (The Thing and Alien) into his film with limited success. I certainly got a sense of the former when all the rag-tag crew were being introduced in the first act, but most of them lacked the wonderful character flourishes that distinguished them in John Carpenter's masterpiece. The reference to the last chunk of Alien, where the last remaining members were rushing against the ship's self-destruct, worked considerably better and enhanced the tension of the movie's climax.

[REC] also felt more like an action film than a horror film, as well. I'd have no problem with that, but that's not really what I've come to expect from the this series. I mean, the sight of an snarling infected person running full-tilt at me is always going to get my back up, but the inspired “engineering” of the scare set pieces seemed to be in shorter supply here. I was also disappointed that the supernatural element alluded to in the second film – which made up some of [REC]2's best moments – was all but abandoned.

However, now that I've sounded off about what [REC]4 wasn't, I'll talk about what it was. Still a lot of fun. This series has always been about Angela, and I was glad Balagueró was able to play out her story to fruition. Horror does not have nearly as many iconic heroines as it once did, so she damn well deserved another go-round! It was awesome that Manuela Velasco was at the Midnight screening to watch the movie with us.


Though not the resounding crescendo I was hoping for, [REC]4 was far from a pointless add-on. We've been on this nerve-shredding journey with Angela for seven years now and it deserved a conclusion.

*Q&A courtesy of Robert Mitchell
Posted by Jay Clarke at 10:00 AM