The highest profile event of TIFF's Midnight Madness this year was the world premiere of Kevin Smith's new film, Tusk. 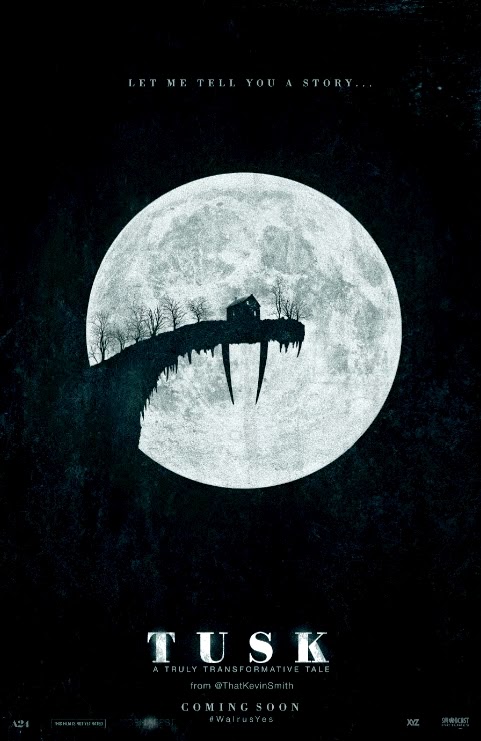 While travelling in Manitoba, an acerbic podcaster (Justin Long) becomes the captive of an eccentric old man (Michael Parks) with a particularly bizarre obsession.

So yes, Tusk is about a man who wants to turn another man into a walrus. And yes, this movie not only delivers on that promise, it is as messed up as you would imagine. The movie was birthed from an episode of Smith's own podcast, where he talked about an online ad from the UK in which someone was offering free room and board if they were to dress up as a walrus. Smith pretty much talked out an outline for a possible film on the air, and then asked his listeners to vote on whether he should make it. Audience tweets using #walrusyes then drove Smith to make good on his promise, and just over a year later, he was standing on the stage of The Ryerson introducing it.

These actions only speak of Smith's growth as a filmmaker. Or, if not growth, at least evolution. After many years in the studio system and self admittedly “burning his career to the ground three years ago”, he has gone back to making the movies he wants to make. If Red State was Smith spreading his wings creatively, then Tusk represents him stepping off the ledge to the freedom of open air.

Aside from the crazy subject matter, it was the performances that really made Tusk come to life. Michael Parks was the main draw for me, and he is again in top form. He doesn't quite have anything that reaches the level of his monstrously captivating monologue in Red State, but there are multiple meaty exchanges between him with Long. Speaking of Long, he impressed me here with his commitment to a role that was, let's just say, challenging. His agent apparently advised him against it, saying “you were already the apple guy, now you want to be the walrus guy?”, but he went ahead and took the role anyway. Good on him. Then, there is obviously Guy Lapointe. I have to hand it to Smith for how long he was able to keep this particular cast member a secret for as long as he did. Lapointe is a welcome addition and keeps the comedy coming in a third act that most certainly would have deflated without his presence.

The sometime comparison to The Human Centipede was one Smith welcomed saying he considered Tusk an “open source” film, also admitting that he inserted tons of material from past episodes of his podcast into the film. I feel Tusk is a way more accomplished effort than Tom Six's shock opus because it goes for more than just the gross out. Smith is really starting to get comfortable technically and though he'll always be a storyteller that relies largely on dialogue, you can see him trying new things with the camera, not only with what he's doing with it, but what he puts in front of it. I know the image of that first close-up to shock zoom out of the big reveal won't leave my head for some time. I mean how often does a movie offer you something that you have truly never seen before?

Which leads to me to having to mention the fantastic effects by Bob Kurtzman. Smith's only direction to the gore guru was “Leatherface Walrus” and by God, did Bob deliver! It is a wonderfully grotesque piece and your eyes cannot help but be drawn to it every time it is onscreen. It makes me think that the particularly cheesy CG effect at the film's opening was put there intentionally to lull us into a false sense of security. Tusk is another title to add to the already teeming list of KNB triumphs.


This “new” Kevin Smith is super exciting and his sincere and genuine affinity for the genre is even more welcome. He loves these fucked up and fuzzy corners of cinema and has now twice shown a steady hand at making them flesh.

*Q&A photo courtesy of Marc-Andre Miron.
Posted by Jay Clarke at 10:00 AM

Can't wait to see this!