Continuing into Saturday, my day was pretty full of panels, which was doubly fortuitous, as my contact with the ridiculous crowds of the Expo's busiest day was kept to a minimum.


The Black Museum conducted a lecture in the afternoon about the history of home video, so I naturally couldn't pass that up. 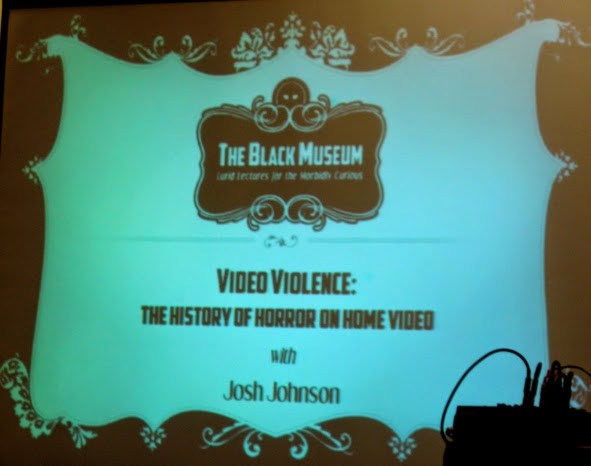 Josh Johnson, the director of the great VHS doc Rewind This, was on hand to take us down memory lane. He touched on all the main areas, including both format wars, the Video Nasties and how the advent of VHS shaped the film production and distribution industry.

I liked that Josh made sure to emphasize that horror had a very big presence during the home video of the mid-eighties, due to indie companies like Magnum, Paragon, Embassy and Continental, who were able to get titles on shelves quicker than their Hollywood counterparts.

Josh also had some great video tidbits, which included company logos, intros and this priceless promo reel for A Nightmare on Elm Street 3.


I also learned that the first SOV film was not Sledgehammer, but this 1982 flick called Boarding House, which I absolutely, positively have to track down now. 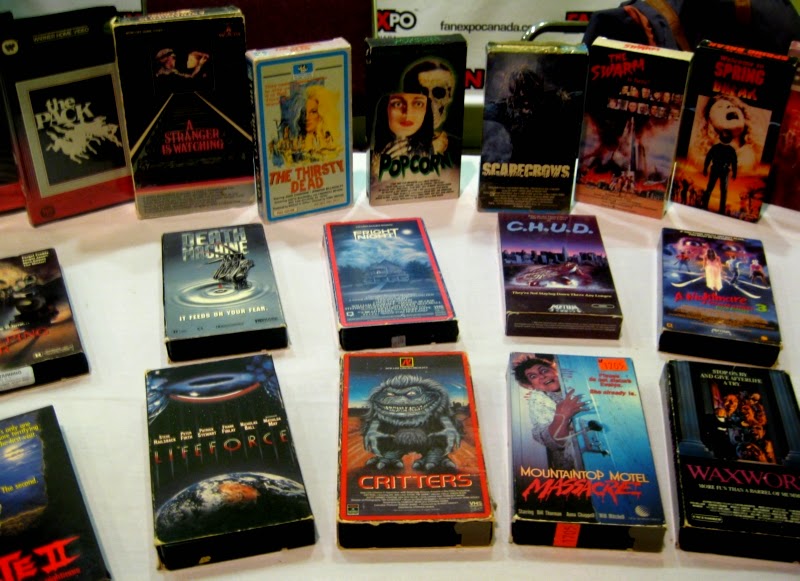 Fortunately, the Black Christmas reunion panel was in the same room right after, so I didn't even have to move. Local talents Art Hindle & Lynne Griffin were on hand along with Nick Mancuso and the great John Saxon, who recently received a star on the Italian Walk of Fame.

There was a lot of reminiscing about how great and innovative a director (and human being) the late Bob Clark was, as well as just how Goddamn cold it was shooting in the winter of '73.

Art Hindle answered about whether it was a fun movie to shoot despite the cold;

“No, it was fun. We were mostly inside, you know. A lot of us knew each in Toronto. It was unique. There wasn't a lot of jobs around then, so we just felt lucky to be on a set and working. We were working with Margot Kidder who was hilarious. Olivia Hussey was a sweet lady and brought none of the airs of somebody who did a fabulous movie like Romeo & Juliet. Andrea Martin was just in the beginnings of her career. Yeah, we just had a great, great time.”

Nick Mancuso talked about performing as the caller in the movie;

“There were three voices, there was me, the director Bob Clark, and an actress whose name was Mugsy Sweeney I think, and they were blended together in post... I stood on my head to compress the thorax to give it as spooky as sound as possible, so that's how we recorded it.”

Earlier in the day was the Bruce Campbell Q&A. Even better was that his friend & cohort Ted Raimi joined him onstage and they proceeded to ham it up to everyone's delight. I mean, you know how these guys are together, it's like watching The Three Stooges – minus the fake shemp (see what I did there!)

I only caught the last half-hour of this as I was at another panel, but it consisted of them pulling fans up on stage to showcase a “demonstrative talent”, which would in turn earn them a five dollar bill out of Bruce's pocket. The bits I saw consisted of a lady performing CPR on Ted, impromptu LARPing, and a cartoon voice-off.

When the duo did start answering questions, Bruce quickly dealt with the obligatory ask about Evil Dead 4;

“Well, there's no Evil Dead 4 right now because as you may know that Sam and his brother Ivan are developing an Evil Dead TV show, which will star me in some capacity.”

He also added that he didn't know whether it would really come to pass, but he was certainly up for it. You know, the usual.

When someone asked if Bruce had stolen his coat from Don Cherry, he replied;

“I'd probably be offended if I knew who that was!”

Toward the end of the panel, important issues were decided when audience applause dictated that Autolycus would win in a fight between him and Joxer.

I mentioned that I missed most of this panel because I was at another event. It was perhaps the only thing that could have taken precedence over seeing The Chin perform – The Twin Peaks reunion panel.

Actors Sherilyn Fenn, Sheryl Lee and Ray Wise were in attendance to celebrate the twenty-fifth anniversary of the ground-breaking television show. They were all visibly humbled by the amount of people that showed up to see them. I wish the panel had been twice as long, but here are a few little snips.

Fenn talked about her experience auditioning for David Lynch;

“I had met somebody who had encouraged me to stop trying to be who everybody wanted me to be and to be myself in interviews. I interviewed with David, and I didn't know so much about him, as I was only about twenty. So I went in there and was kind of quiet, and he asked me about the script. It went fine and I left. A week later they called and said that David had written me a part. It was such a cool confirmation of be yourself, you're enough.”

Lee was asked about what it was like coming back to the character of Laura Palmer for Fire Walk With Me.

“The series ended rather abruptly, and as an actor, I didn't feel finished with her (Laura) even though I knew she was dead. And then Maddy died so fast. That is strange creatively. You're playing these people and you feel like you know them inside and out and then it's just cut so short. So, when David came to me, there wasn't a script at first, it just started in conversation, he said, I'm thinking of doing this about her life and the last few days and these other storylines and such. We would just sort of talk Laura and life. It's so strange that I have absolutely no memory of ever seeing a script even though I know there was one, but I also don't have a clear definition of where the series ends and where the film starts.”

Ray Wise - as I discovered when I recently saw him in Montreal promoting Suburban Gothic - is a real character, who also happens to do a great David Lynch impression, which had the crowd in stitches. He told a few stories, including one about what he did when he learned that David Lynch wanted him to play Leland Palmer;

“I had assumed I was going to play Ben Horne or the Sheriff. So, when he said Leland, I had to go back through the script. And I was reading... Okay, he finds out his daughter is dead, and he cries. Then he goes to the mortuary and identifies her body, and he cries. Then he's in his daughter's bedroom when the sheriff's going through all of her belongings, and he looks sad. And I thought, well all this guy does is cry! And then it dawned on me, this indeed was the challenge. I had to find different degrees of crying, and mourning, and you know, this was going to be something.”

At the end of the day, there was a screening of Fire Walk With Me at The Lightbox on glorious 35mm. I've seen the film several times now and two things always stand out to me. The first is how well balanced it is. It shouldn't be, as the first act is wonderfully comedic in tone, then turns on a dime, progressively getting more and more disturbing. Yet, the madman David Lynch is always in control. 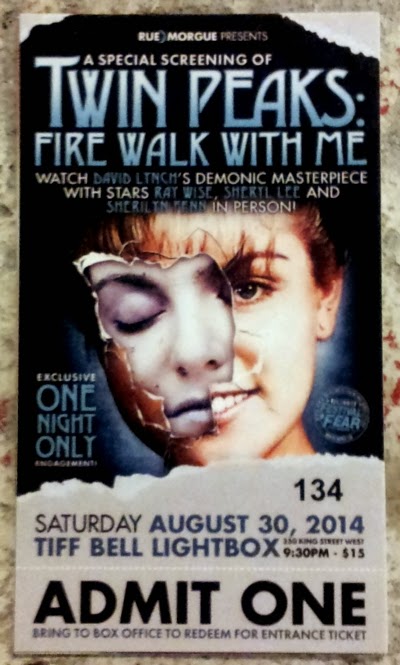 The second thing is obviously Sheryl Lee's performance. There is so much range here, sometimes within a single scene. I've always been in awe of it, and her. She can be so terrible to people, but, like she does with Bobby outside the school, she flashes that iconic homecoming queen smile and you can't stay mad at her.


Come back tomorrow for my wrap-up post featuring photos from around the show floor.
Posted by Jay Clarke at 10:00 AM