A Fate Worse Than Death.

I remember the first time I heard about the premise to The Human Centipede. I think my first reaction was “ewwww!” Then I recall being incredibly surprised that the Japanese didn’t conceive it. No, it was, in fact, Dutch and this vomitous concept soon set the InterWebs ablaze. 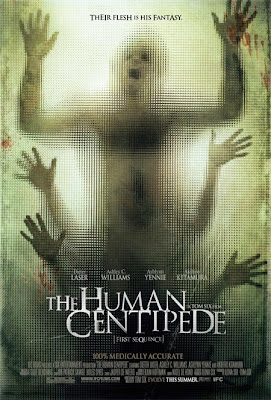 After getting a flat tire while vacationing in Germany, two friends find refuge at the home of one Dr. Heiter. Unfortunately for Lindsay & Jenny, he has in mind to include them in his latest diabolical experiment – creating a Siamese triplet connected via a single digestive tract.

So, like Rubber, The Human Centipede was pretty much what I was expecting. It is a movie that was made solely to make its audience squirm. It has three things going for it. The first is, of course, the premise. When you first hear it, you either think ‘no thank you’ or ‘yes please’. However, even if you have no intention of subjecting yourself to such things, your imagination runs wild anyway and that is often even worse than anything a filmmaker could put onscreen. Either way, director Tom Six wins. The second is how surprisingly well made the movie is. With it being a gross out flick, they could have just pointed the camera at their disgusting creation, but the production value and visual style of the film are actually pretty competent. The third, and perhaps most important, is Dieter Laser, who plays the insidious surgeon Dr. Heiter. Seemingly channelling Udo Kier, he glowers his way through the entire movie. It just would have not worked at all without his presence. 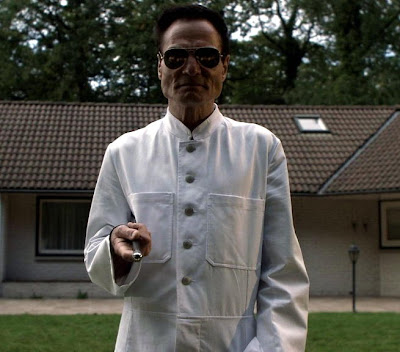 That being said, this is where the positives stop. The Human Centipede has an underlying comedic tone, which tends to circumvent the horror elements of the piece. I know that adding humour makes it a more fun watch, but with a premise this wretched I wonder how it would have been received if played straight. The dialogue during the setup is extremely clunky and bone-headed character motivations abound throughout. I also would've liked to have seen more of the actual procedure. As I stated, leaving things to the imagination can be very powerful, but for a movie that purports to be 100% medically accurate, they could have shown more of the surgery. I was with a bunch of friends at the screening, one of whom is a nurse and she was irked considerably by its omission.

None of these things really stopped The Human Centipede from still disturbing me though. I think seeing the beautiful blue eyes of Lindsay (Ashley C. Williams) peering over a guy’s ass for the majority of the movie caused a little bit of my soul to die that night. She gets the worst of it here and I give her full props for her endurance.

This movie exists because of its twisted concept. While eliciting funds, all I think Tom Six needed to do was draw this -- 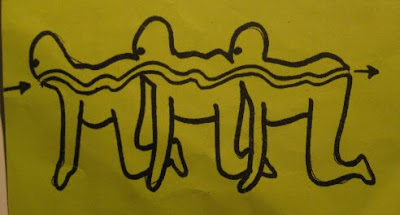 --to have investors hand their money over after saying, “I have to see how this plays out.”

The Human Centipede has its share of problems, but there is no doubt that the images within stayed with me for sometime after.
Posted by Jay Clarke at 5:50 PM