A Remake With Teeth.

Let me take some time out from my Toronto After Dark reviews to comment on a fairly big horror release that many of us have been waiting a while for. 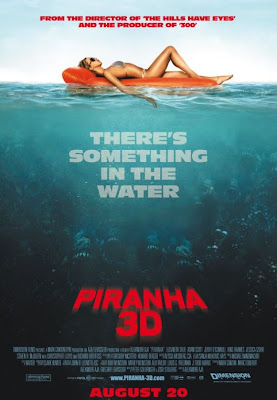 When an earthquake opens up a fissure that frees tons of ravenous prehistoric piranha, it spells doom for the neighbouring community of Lake Victoria, whose population has recently ballooned for its Spring Break festivities.

If you're looking for grisly mayhem mixed with gratuitous nudity, boy did you ever come to the right place! I think director Alexandre Aja delivers on pretty much everything I was expecting from this movie.

First, the gore is top notch and showcases some really inspired kills. Piranha 3D starts slow with the standard fish close-ups & red water – perhaps in an homage to its fore bearer – and then just explodes into unadulterated carnage at its climax. The boys at KNB EFX must have been working overtime on this one. Obviously, the best gore is the stuff that is done practically and there is quite a bit of it. To compound the enjoyment, Aja gives you lots of skin to stare at between the fish food set pieces, as he is a man who clearly knows what his audience wants. To add even more amusement to the festivities, are the abundant familiar faces. Richard Dreyfuss shows up looking similar to his character in Jaws, Christopher Lloyd comes in for a time playing his beloved eccentric scientist bit, and fellow filmmaker Eli Roth has a cameo as, well... I guess himself pretty much. It was also great to see Elisabeth Shue again, this time in the action chick role no less, as the town's sheriff. 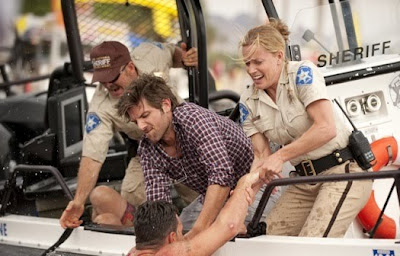 I think the best thing about Piranha 3D is that it knows what it is and what it isn't. It's just a fun gore fest, where you can have a scene where busty nymphs Danni & Crystal (Kelly Brook & Riley Steele respectively) have a naked underwater romp set to Delibes' “The Flower Duet” and it not be out of place. It is truly a thing of beauty. The only thing I would have liked to have seen was the filmmakers use the feeding frenzy sound effect from the original movie. I saw Joe Dante's version over twenty years ago and that sound still stays with me. It would have been an awesome beat if they'd thrown that in there.

As for the 3D, it is almost irrelevant. Unlike with last year's My Bloody Valentine remake, where the third dimension was nine-tenths of the enjoyment, this time it added very little. I could handle the 3D fish because their design was actually pretty cool, but there were a few sight gags, like when Kelly (Jessica Szohr) throws up digitized puke into the camera, where it just looked like cheesy CG.

The bottom line is I have to give top marks to Aja here. It shows that Mirrors was a mere misstep in a hopefully long and bloody career.
Posted by Jay Clarke at 2:31 PM

Piranha 3D is the best movie of the summer.