On Monday, Toronto After Dark held its first red carpet premiere for The Last Exorcism. I was cautiously optimistic about this film because it sounded intriguing, but had a blanket ad campaign reminiscent of previous supernatural underperformers like last year’s The Haunting In Connecticut. The film’s producer, horror-meister Eli Roth and both stars Patrick Fabian & Ashley Bell were in attendance, which made for a crammed house at The Bloor. 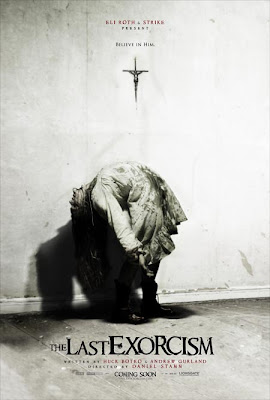 When Reverend Cotton Marcus (Patrick Fabian) takes a documentary crew with him to help a man who says his daughter Nell (Ashley Bell) is possessed, it quickly becomes apparent that she is indeed one very troubled girl.

So, the good news is that The Last Exorcism turned out to be a pretty solid effort. The bad news is the marketing isn’t doing it any favours in terms of what the film actually is. Advertising like this bit 2005’s The Exorcism of Emily Rose in the ass – its audience bought tickets to a supernatural thriller and instead got, beyond the scares in the TV spots, a courtroom drama – so I really hope The Last Exorcism doesn’t suffer the same fate. This would be a shame, as in addition to it being well written, it impresses due to its two leads. Fabian is excellent as Reverend Marcus. He won the capacity crowd over early, so that when shit went down, you really wanted him to get the fuck out of dodge. Ashley Bell also puts in a chilling performance as Nell. The exorcism scenes are all her, with no help by digital means. In fact, I think I could only point out one visual effects shot in the entire film. It makes The Last Exorcism seem more like the 2006 German film Requiem than Emily Rose. 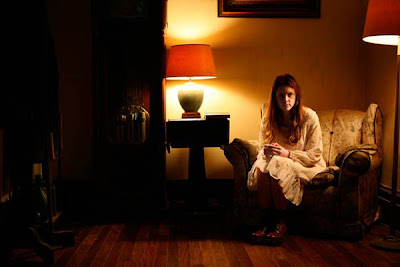 Alas, therein might lay the rub for some people. This film is more about the characters than the act itself. If you’re walking in expecting a fourty-minute exorcism sequence soaked in jaw-dropping special effects, you may be disappointed. There is also the found-footage format that I’m sure some people are tiring of by now, as well. Sure, the same problems that come with this type of narrative are still there, but for the most part I could overlook them. I was lukewarm on the ending in that there were some elements I liked and some that I didn’t, but hey, they can’t all be as brilliant as the final moments of The Blair Witch Project now, can they? 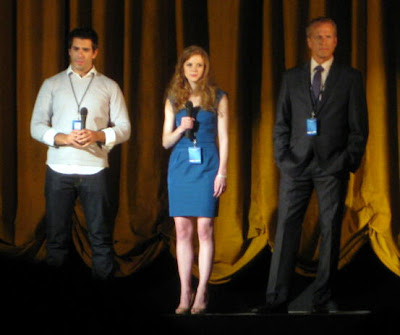 So, as I said, the marketing may make it seem like generic horror fare, but I think The Last Exorcism is worth a look. It concentrates on story backed by great performances to deliver something not only different from what I was expecting, but also more substantial.

As for the screening, Eli Roth was very excited to be there, as he reiterated that it was in Toronto (at 2002's Midnight Madness) that his career really began with our reception of Cabin Fever. I was at that screening eight years ago and remember just how much everyone at The Uptown (R.I.P.) loved it to pieces. Here below is video of Rob Mitchell talking with Roth, Fabian & Bell about the film.

Also, for video of the premiere, click here.
Posted by Jay Clarke at 10:03 AM