Having missed Rubber at Fantasia, I was glad that to see it included in Toronto After Dark’s line-up this year. 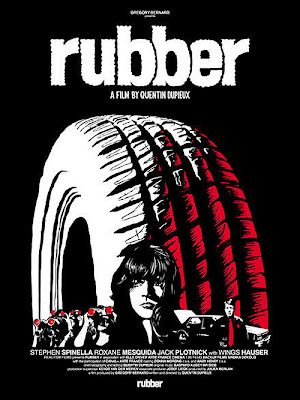 Director Quentin Dupieux immediately establishes tone when his main character, our tour guide of sorts, Deputy Xavier emerges from the trunk of his own car to tell us that the ensuing story happens for “no reason”.

And that is exactly what we get. The tale of an angry, psychic tire that kills with the power of his mind. For no reason. He just does it, and lots of exploding heads ensue. The movie also inexplicably features a chorus, made up of onlookers who watch the proceedings from afar through binoculars. I’m not sure whether their poor acting was intentional or not, but thankfully their role is minimal. 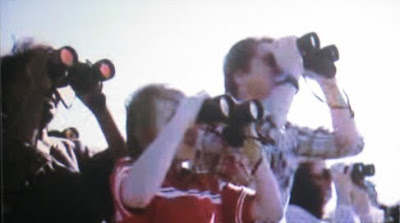 I certainly got my share of enjoyment from this little experiment, but I’m not sure it’s really able to sustain itself for the full eighty-five minute running time. Fortunately though, Rubber does end on a fairly strong note and has some great music to help it along its way. Since Dupieux comes from a musical background and is partnered here with fellow Frenchman Gaspard Augé (one half of the electro-house band Justice), their collaborative beats really give the film some flourish in its more drawn out sections. There is no doubt that Dupieux has a great eye, so I’d love to see what he could do with a meaty script. 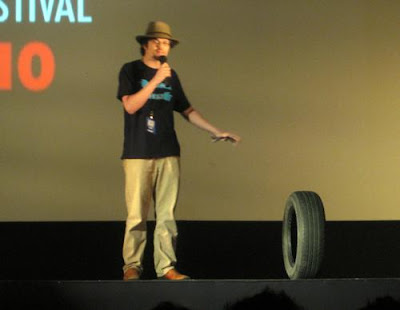 Rubber is an enjoyable one-time view and something I would recommend you check out because of its original premise and unique style, but I can’t see myself revisiting it anytime soon.
Posted by Jay Clarke at 5:34 PM

I would absolutely see this again...It just struck all kinds of right notes with me - as you mentioned the music is great, it's funny, it's absurd, it's smart, etc.

Don't think I've heard too many negative reactions so far. Don't know if it'll get enough really high scores to win an audience award though. I expect Last Exorcism or Human Centipede will take it (I didn't really care much about the latter of those). Would love to see Phobia 2 take it. Heartless was terrific, but I think it could be a pretty divisive film.

Yeah, I'd say Phobia 2 was the strongest offering, though I must say I have a soft spot for All About Evil as it was such a surprise.

Indeed "All About Evil" was a surprise - especially after how bad the opening 5-10 minutes were...But I enjoyed the heck out of it. It's not perfect, but Lyonne was suitably over-the-top and the situations were actually pretty well constructed. And those posters! B-)