The Swiss Go To Space.

Yesterday afternoon, I took in the Toronto After Dark screening of Swiss science-fiction flick Cargo. This passion project from directors Ivan Engler & Ralph Etter took eight years to complete on a scant $2M US budget. 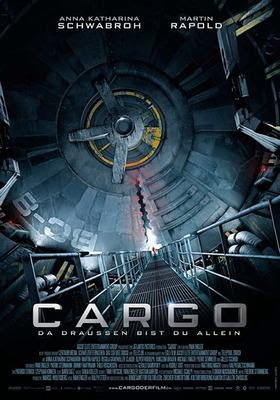 Medic Laura Portmann (Anna-Katharina Schwabroh) takes on a job on a space freighter; in order to pay her way back to her loved ones on the planet Rhea. During her shift, she discovers that the cargo they are hauling might not be what the crew were led to believe it was.

I want to start off by saying how impressive the effects and production design are in this film. It’s an extremely ambitious project that Engler & Etter took on here and visually Cargo is almost flawless. The scope is well established and doesn’t shy away from showing you how great everything looks – maybe even to a fault. The film itself is fairly slow and ponderous, which I don’t mind, but Cargo never really seems to hit its peak. I feel it's one of those movies where all of its components are solid, but don’t come together to form a satisfying whole. Last year’s Pandorum came to mind while I was watching the credits roll on this. It doesn’t share much in the way of subject matter, but it was another case where a movie borrowed a lot of elements from better films. 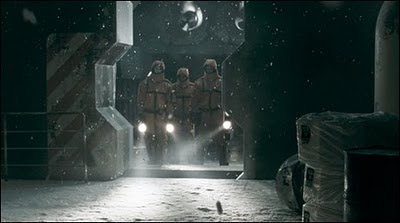 There’s also a romance angle that is thrust on us about halfway through that felt forced and awkward. The really excellent straight-up sci-fi of recent years (Moon, Sunshine) succeeded because they focused on just that and didn’t feel the need to dabble in other genres, like comedy or romance. I think some of my lukewarm feelings may also come from expecting something else. I was hoping for something more like Alien, but Cargo bears more resemblance to Solaris in tone. The film can’t be held responsible for that of course, but it is what it is.

I think the filmmakers should be proud of what they’ve accomplished here, a polished effort that looks on par with some flicks that cost fifty times as much. As a film though, it had its moments, but felt somewhat flat to me overall.
Posted by Jay Clarke at 3:02 PM