"Have You Ever Been Fish Raped?"

Another year (its fifth!) of Toronto After Dark is underway, and I was there for the opening on Friday. The first screening was that of Henry Saine & Devin McGinn's The Last Lovecraft. 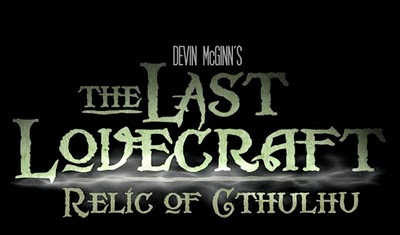 In a single day, office drone Jeff (Kyle Davis) finds out he is the last descendant of H.P. Lovecraft, entrusted with one-half of a relic that can unleash hell-on-earth and is set upon by the minions that seek to capture said relic. Jeff and his roommate Charlie (Devin McGinn) endeavor to keep it from falling into the wrong hands.

I have to say this was quite an entertaining yarn. As we all know, the works of Lovecraft are very hard to adapt. The ideas are extremely grandiose and a lot was often left to the imagination. The filmmakers were quick to point out after the film that to try and do Lovecraft straight on their budget would have been a mistake. They instead went the comedic route, yet still tried to keep as many elements belonging to the legendary writer as possible. I think I fully clocked into what they were going for when the villain, a red-skinned demon named Starspawn (Ethan Wilde) – who kind of reminded me of a lesser version of Nightbreed's Peloquin – first showed up wearing a T-shirt sporting a picture of a unicorn firing dual Uzi's. When dealing with Cthulhu exposition, The Last Lovecraft shifted into motion comic animation, which I thought was a clever way of handling their budget restraints. 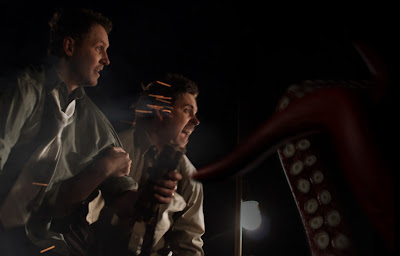 The three 'heroes' of the story – a Cthulhu nerd named Paul (Barak Hardley) also embarks on their quest – work well together and some of the biggest laughs come from them fumbling their way along. It was also good to see Martin Starr (of Freaks & Geeks fame) show up in a cameo. The Last Lovecraft does start to lose its steam by the end, despite the hilarious references to the aforementioned fish rape by recluse Captain Olaf (Gregg Lawrence), but never overstays its welcome.

At the Q&A, writer & producer Devin McGinn did say that the movie was the first of a planned trilogy, but they have to see how this one does before continuing the endeavor. In my haste to get out the door, I sadly neglected to bring my camera, but hopefully I'll put up some of my buddy Mitchell's video footage of the affair in the near future. I do however, have this genius piece of tie-in marketing that we were all handed while walking into the theatre. 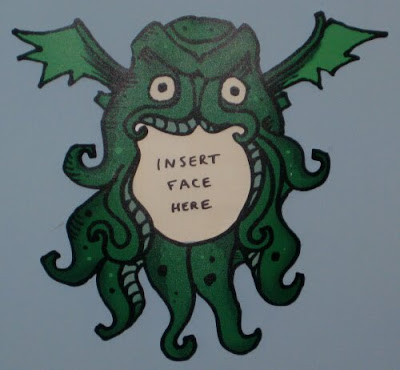 There is no doubt that The Last Lovecraft has its limitations, but seems to embrace them and I had some fun with it.
Posted by Jay Clarke at 11:42 AM