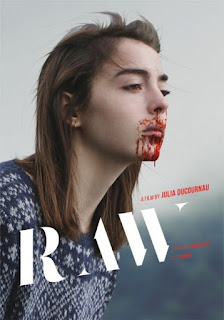 After being forced to eat meat during a hazing ritual at her first week at veterinary school, vegetarian Justine (Garance Marillier) begins developing deep carnivorous urges.

During the 00's, horror fans were blessed with a series of films collectively referred to as The New French Extremity that included such nerve-shredding titles as High Tension (2003), Inside (2007) and Martyrs (2008). Then they seemed to fall away, just as the Spaniards took their turn as the darlings of modern horror. Well, after seeing Raw, I can say the French are now back with a vengeance.

Raw has been described as both feminist and veganist, but I feel those labels are too narrow. This is a coming of age film. Much like films such as We Are What We Are and Ginger Snaps, Raw had a grounded and introspective quality to it that was so incredibly well orchestrated. The subject matter was both primal and sexual, which elicited genuine reactions from the crowd. You could feel it in the air and it gave the film's title all that much more meaning.

Some viewers may have felt a little too much, as I'm sure you all heard about the pass-outs and ambulances. The PR was quick to jump on that and I can corroborate, as one of the affected was sitting a few seats over from me. Raw was gory and gross, with many wince-tastic moments, but I'd be surprised if it was the visuals alone that caused the kind of thing I saw – they were more like seizures than pass-outs. I can't explain it, but it was like there was some other variable at play that night. It was a very strange experience.

The highlight of Raw – apart from the awesomely tactile F/X work by Olivier Afonso, the man responsible for Inside's nightmarish splatter – was the fantastic and fully committed performance by Garance Marillier. Ducournau said during the Q&A that she has been working with Marillier for several years now and they have developed a creative shorthand. This was immediately evident onscreen, as Marillier was fearless and brilliantly calculated in every stage of her character's evolution.

It is one thing to say that a movie was made for the Midnight Madness audience, as was the case with this year's opener, The Belko Experiment, but it's another thing entirely to make a film that defines the programme. Raw is the kind of work that keeps the spirit of Midnight Madness alive and away from marginalization and mediocrity. Ducournau's film is bold and veracious, possessing an energy that is unique to the cinema from her corner of the globe. Don't ever change!
Posted by Jay Clarke at 10:00 AM