It's Not Just For The Japanese Anymore.

To add to this year's docket of TIFF films, I was able to score a ticket to Amat Escalante's The Untamed. 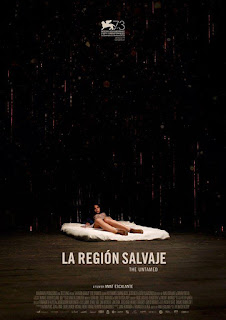 This Mexican-Danish-French-German-Norwegian-Swiss co-production was a complete question mark for me and gave me no indication of what to expect. Although, its placement in the Vanguard programme did imply there would be some edge. And that it had.

I think that mystery was a large part of its strength. Only adding to this was the prolonged opening shot of an asteroid floating in space. Then the first scene hit, and I was like, ohhhh, I was not expecting this! The Untamed exists in a space of which I have rarely seen – well, in live action anyway. I think the closest reference would be Andrzej Zulawski's Possession, as they both feature domestic turmoil and otherworldly external forces. I would also offer that The Untamed's deliberate pace and abundance of beautiful cinematography recalled Jonathan Glazer's Under The Skin.

This film's ingredients of family drama and science fiction made for a singular vision and I expect its exploration of sexual desires will confound many a viewer. I guarantee some of the blue-hairs that wandered into the theatre had never seen anything like this before. Despite its more shocking material though, the majority of The Untamed operated like your average art-house film. It was quiet, brooding and concentrated on humanity's baser natures.


I think I'd classify The Untamed as more of a film with genre elements, rather than a genre film, but it was a well executed example of how some provocative imagery can leave a mark on your psyche. If you dig films of a deeply sexual nature, then give this a whirl. I'll leave the cabin door open for you.
Posted by Jay Clarke at 5:00 PM