The next film I watched from the Time Out Best 100 Horror List was Andrzej Zulawski’s Possession. 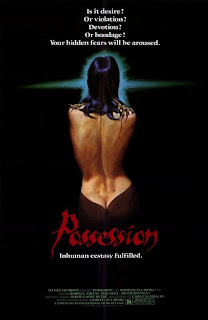 In an attempt to save his crumbling marriage, Mark (Sam Neill) has his wife Anna (Isabelle Adjani) tailed to see if she is having an affair, only to discover she may be involved in something much worse.

After a few Time Out titles that have been a little middling, here we have a bonafide gem.  This movie is fuuucked up, and frankly I’m amazed that it's not more widely known considering some of the unforgettable images within. I mean, if it wasn’t for its provocative VHS cover, I probably would’ve never heard of this movie at all.

I must admit that I wasn’t initially on board with Possession, as the first act was a rough go for me. I have a strong aversion to films about doomed relationships, and I don’t think I’ve ever seen an onscreen couple more toxic than Neill & Adjani.  I also thought there was a bit of overacting early on, but then discovered that it fit the overt weirdness of the piece once things got going.  It does take a full fourty-five minutes before you discover what it is actually about, but once you clock into it, even the out there ending makes some kind of sense.

Adjani is gorgeous in this film and invested one-hundred-and-ten per cent, both emotionally and physically.  Sam Neill also throws himself into this role.  I checked to see if his part in Omen III had anything to do with him being cast for this, but it turns out both movies came out in 1981.

I love the calculated, whipping camera movements in this film.  They keep the viewer disoriented in a way that is much like the films of Gaspar Noe. Speaking of influences, and being fairly late to the party I’m sure I’m not the first to come to this conclusion, I have to wonder if Clive Barker drew inspiration from this film while writing (or at least directing his subsequent film adaptation) The Hellbound Heart.


My favourite thing about this film has to be the creature design though.  It is completely unique and nightmarish, like something out of an H.P. Lovecraft novel. Even the score is fantastic, perfectly accentuating the film when it has to.