The next film I watched off the Time Out Best 100 Horror List was Harry Kümel's 1971 film Daughters of Darkness. 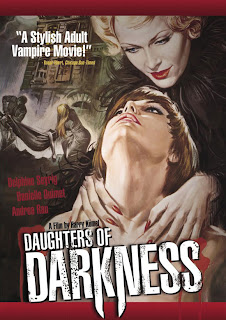 A newlywed couple staying at a resort hotel meet a mysterious woman named Countess Bathory (Delphine Seyrig) and strike up an increasingly bizarre relationship with her.

This film is best described as a beautiful looking film with beautiful women.  The cinematography is top notch, and the central location, Belgium's Grand Hôtel des Thermes, seems like it was made to be immortalized on film. 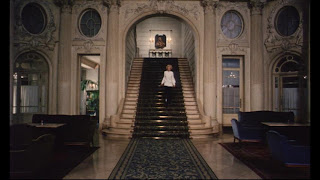 I also love the way colour is used in this film. Except for the first scene in the train car, which is bathed in blue, the entire film is accented with red, much like Mario Bava's slasher Blood and Black Lace.

I found Daughters of Darkness to be fairly unique in its handling of vampire mythos, as well.  The filmmakers ditch the fangs and crosses employed by most of their contemporaries and go for a more suggestive feel.  The film is still soaked in erotica, but is miles from the vampire films being produced by the likes of Hammer in the sixties and seventies.

Though I found some of the character's behaviour puzzling during much of the film – I had to through my hands up at the scene where Stefan (John Karlen) viciously beats his wife Valerie (Danielle Oiumet) – the ambiguous nature of the hold the Countess had on the people around her made it easier to swallow.  This was mainly due to Seyrig’s spectacular performance here.  It is said that she modelled her performance on silent movie star Marlene Dietrich, which makes sense, as it her presence onscreen that is just as commanding as anything that comes out of her mouth.  Ouimet and Andrea Rau are also extremely striking in this film.

I can quite easily say that there is no shortage of things to look at in this film and that it is, I assume, why  Daughters of Darkness made it onto the Time Out list. It is a visual feast, but in my opinion, its narrative stumbles often, especially in its rushed third act.
Posted by Jay Clarke at 10:00 AM

Marlene Dietrich wasn't a silent movie star. Yes, she made silent movies, but she achieved international success after her first talkie, The Blue Angel, and continued making talkies after that. Sometimes her movies do resemble silents, though, especially her early ones, in which she does little talking and in which we see intertitles.

Yeah, I'm aware of that. I'm sure you'll agree though she had the presence of a silent film star, which is what I was getting at.