The next title I watched off the Time Out Best 100 Horror List was Paul Morrissey's 1973 film Flesh for Frankenstein. 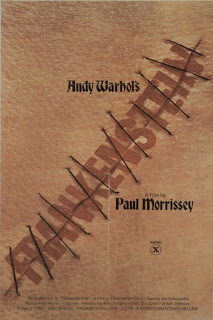 I'm not sure why I never saw this title until now. I did see the follow-up, Andy Warhol's Dracula – which was on a different list of mine, one of films that the band Skinny Puppy had sampled in their music – when I was working at the video store, so I maybe I just figured I got the gist. The film is a highly sexualized retelling of The Bride of Frankenstein, but features a role reversal on the classic tale, which I found kind of interesting. I did find it hard to tell if was meant to be a black comedy though. I mean clearly it is, as almost everything about the film is over-the-top, but was that the intention I wonder? 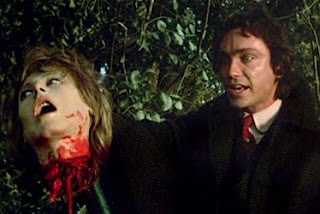 So, that's why I find the inclusion of Flesh For Frankenstein on the Time Out List a little peculiar. Truth be told, I seem to remember its vampire counterpart being a little more substantial. Both have glorious gore set pieces and unrestrained performances by Udo Kier, but I recall Dracula flowing a little better. It has been a long time, so I could be mistaken. However, there is no mistaking that it is Kier's presence that elevates the film over similar works from filmmakers like Jean Rollin, for instance. Rollin's ouevre may have had better cinematography – granted there are some shots in Flesh that you could hang on a wall – but none of his films had anyone as commanding as Kier in them. And none of them ever had a line like;


I wonder why Skinny Puppy never sampled that one.  This is the first title I've come across on the list whose position is a little dodgy, but I still had fun watching it.
Posted by Jay Clarke at 10:09 AM

Is this the movie where he cuts the girls head off with giant scissors?

Well, yes and no. There is the scene you described, but it's a dude. Check out 2:13 here for the scene.
http://www.youtube.com/watch?v=m40Bs7Ko5dw