This weekend, I went to Shock & Awe, a movie marathon at The Revue orchestrated by Toronto film historian Dion Conflict. 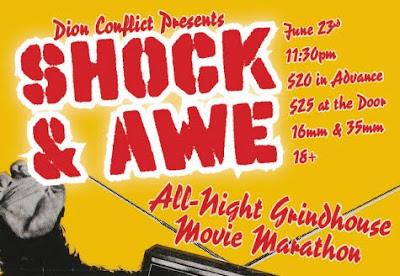 Shock & Awe consists of six vintage films from Dion’s collection (on 35mm, and in some cases 16mm!) screened all in a row, starting just before midnight. It has been going for a while – I believe this one was the sixth iteration – but this was the first I'd attended.

There was lots of food available, “flashing light” specials, tons of raffle prizes – I am sad that I did not win one of the Islamic clocks up for grabs – and crusty pre-show entertainment, so it made for a completely unique experience. As for the films, here’s a rundown.

The night started off with the zany seventies spoof The Groove Tube. The movie is a series of comedy sketches and felt like a precursor to Saturday Night Live. It even featured a young Chevy Chase in some of the skits. The movie also had several faux commercials, including this one for the Uranus Corporation.

Most of the sketches were at least somewhat amusing, and I must have enjoyed myself because it was over before I knew it. Now if I could just get ‘I’m looking over a four-leaf clover’ out of my head!

Next, was the 1985 actioner What Waits Below. It’s about an expedition into some uncharted caves to setup some sort of military transmitter, and it’s pretty cheesy. Although, it is not without its charm. My friend Peter had the best quote, when he said he liked it better than Prometheus because it had “smarter scientists”. I can’t really argue when considering pearls of wisdom like;

Plus, What Waits had Lisa Blount who is always easy on the eyes.

From the depths of the Central American jungle, we moved to the British countryside for the 1973 horror film Horror Hospital. I’d seen this movie as a kid, as it was a regular on First Choice back in the day, but it’s been a looooooong time. Pretty much all I remembered was Michael Gough’s decked-out Rolls Royce.

After watching it this time, I realized it’s actually a comedy. There are several scenes that go on too long, but there was still some fun to be had.

After that, Dion played the promised ‘mystery’ film, which we were all (literally) sworn to secrecy about not revealing. All I can say is there was a lot of applause, booing and catcalls throughout. Oh, and Leonard from Community.

The fifth film was the eighties musical Rappin’. I have a low tolerance for rap music at the best of times, let alone at six at the morning, so I took this opportunity to nap in my seat.

The last movie, on loan from The Alamo Drafthouse, was the eighties slasher Sleepaway Camp. It had also been a while since I’d seen this one, and was excited to watch it on the big screen. Even though it is known mainly for its crazy ending, I think the movie works on the whole, as well.


It is a lot meaner than I remembered, with lots of disturbing elements, such as pedophilia and one implied scene where a character gets a hot curling iron up the hooha. ‘Still gotta love that ending though.

And then it was done. As we stumbled toward the exit, and the blinding sunshine beyond, Dion was there to hand us samplers of All Bran as a reward for our endurance.

It was a fun time and definitely the most films I’ve ever watched in a row, at home or in a theatre. Dion now has designs on another Shock & Awe in October, so I eagerly await announcement of what films he intends to show.

To read about last weekend’s events straight from the man himself, check out Dion’s blog here.
Posted by Jay Clarke at 10:00 AM

I'm just glad I wasn't the only one who noticed Leonard from Community in the mystery film. Good write-up! :)