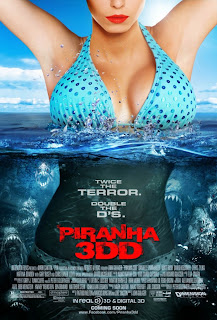 After the Lake Victoria massacre, the flesh eating piranha travel to a newly opened water park.

I need not try to sell this movie to you. From the trailer, we know what it is, and they do, as well. Simply put, Piranha 3DD is ridiculously dumb fun and nothing more.

I might sound certifiable for saying this, but 2010's Piranha 3D had a certain level of credibility that is lacking from this movie. Whether it was the absence of Elisabeth Shue, director Alex Aja or the bloody stylings of KNB EFX, Piranha 3DD is lesser than in almost every facet.

Despite the fact I was giggling throughout pretty much the entire film, there were a lot of things that were noticably deficient in this one. Clearly, director John Gulager and company didn't have as much money as the previous production and the first thing that suffers is the gore. Although there are a lot of 'wow, they went there' moments during the set pieces, the gore never seemed as gratuitous as it should've been. Even the climax, which is set up the whole movie, was not as satisfying as Aja's bloody crescendo. The fish themselves needed to do less swimming around looking menacing and more chomping down on their victims, as there is a disappointingly low body count in this movie. 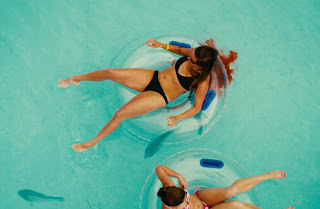 However, there's no question that the movie delivers on the double D's. You need only see the scene where Chet (David Koechner) introduces us to the 'cooch cam' to figure that one out. I would say the funnest part of this movie though, apart from a few of the enjoyably absurd set pieces, were the cameos. Gary Busey and Clu Gulager (of Return of the Living Dead and coincidentally the director's father) appear early on and Paul Scheer, Ving Rhames and Christopher Lloyd return from the first movie. The real star is David Hasselhoff though. His part is a lot more substantial than the trailer would have you believe and he's awesome. He gives you someone to zone in on, as everyone else in this picture is pretty insipid to the point that you want them to become fish food. The Hoff put it best when, during the end credits, he says, “and that is what natural selection is all about.” There was also a gag that recreated the dolly zoom shot from Jaws that got me every time. 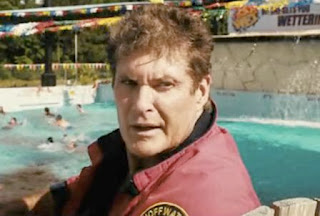 Piranha 3DD is its ancestor's lesser cousin – except for of course the gratuitous nudity – but it's still an entertaining watch for those who know what to expect.
Posted by Jay Clarke at 12:52 PM