I was happy to see a Larry Cohen film on the Time Out Best 100 Horror List, but was initially surprised that the film they picked was God Told Me To. Though I'd never seen it, I thought something more mainstream like The Stuff, It's Alive or even Q: The Winged Serpent would've been a more obvious choice. Well, discovery is what this list is all about, so this 1976 flick was the next entry that I watched. 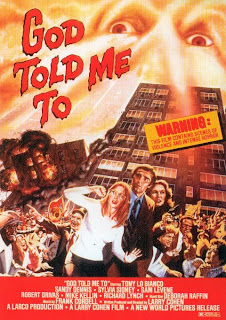 A New York detective (Tony Lo Bianco) investigates a string of murders committed by random individuals who insist that God told them to.

This is a good little film with a unique idea behind it. I can see now why it was singled out for the list. Its subject matter is played dead straight which lends itself to being taken a little more seriously among cinephiles. There is an element of cheesy fun in the aforementioned Cohen films above – although that could just due to the inclusion of Michael Moriarty – which is probably why I gravitated to those titles as a kid. They are creature features all, whereas God Told Me To is a religious thriller with dramatic overtones. 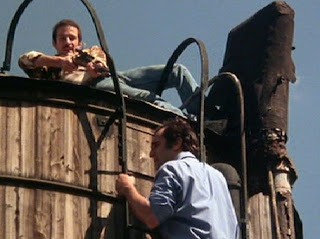 Yet it is still a Cohen movie through and through. It is a character driven piece that is also another love letter to New York. By weaving in footage of the St. Patty's Day parade and San Gennaro festivities, production values soar, making it look like it cost way more than it actually did. Seeing the late Andy Kaufman show up as a cop who goes berserk was also a bizarre treat.

I have to give points to Cohen for being able successfully pull off a one-eighty halfway through the picture. There were elements of alien abduction and body horror that had me scratching my head at the film's end, but a listen to the accompanying commentary – which is excellent by the way – put everything into perspective. 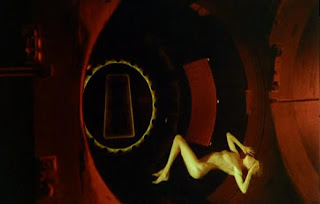 God Told Me To is another example of the great American horror films that populated the seventies, and is definitely among the best of Cohen's filmography.
Posted by Jay Clarke at 10:05 AM