I took sometime this weekend to check out Oren Peli's new project The Chernobyl Diaries. 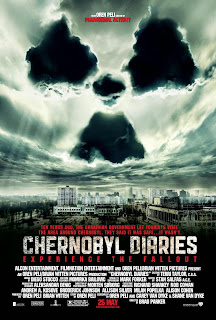 Six tourists travelling around Europe take an extreme tour to the abandoned city of Prypiat, Ukraine. When their bus breaks down and they have to spend the night, they quickly discover they are not alone.

I didn't have such a bad time with The Chernobyl Diaries. Usually it does not bode well when I start hearing about a film three weeks before it is released, so maybe it was my lowered expectations that facilitated that. Don't get me wrong, there is a lot of standard stuff here and the third act doesn't really pay off, but there were a couple of things that stood out to me.

The first thing is as, I alluded to in my post title, is the setting. The city of Prypiat is an intriguing place to set of horror film. The abandoned buildings and eerie ferris wheel really added to the atmosphere. I actually had a flashback to playing Call of Duty, as there was a mission that took place there, as well. When I researched the filming, I was absolutely floored to learn they didn't actually shoot there. Could have fooled me? 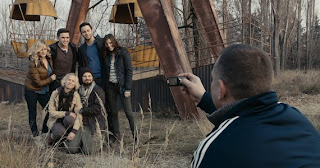 Did you guys learn nothing from Hostel???


Knowing this was Oren Peli, I was fully expecting this to be a found footage movie. Fortunately, except for the opening credits, which have our protagonists filming themselves travelling around Europe, this was not the case. While it is true the movie is still shot in that cinéma vérité style – with lots of prolonged handheld shots and shaky-cam action – I didn't have to spend half the movie thinking 'why are they still filming?'

The Chernobyl Diaries is largely paint-by-numbers, but some amazing production values, an idea that, save for The Hills Have Eyes, is fairly original and some decent performances make it a serviceable genre flick.
Posted by Jay Clarke at 10:04 AM