As I said I would, I ordered Kane Hodder's memoir, Unmasked off Amazon the week after seeing him at Shock Stock last month. 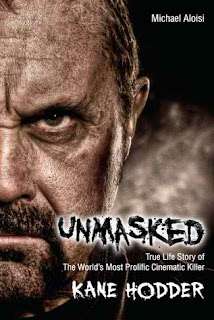 I highly recommend giving this a read. Not only is it packed with stories about some of your favourite horror flicks, but also lets you into a profession you don't really hear much about – the professional stuntman.

It might be easy to think, how can he write an entire book about playing Jason? Well, this was but one – albeit the most famous – part of a very storied career. In fact, it is a full two-hundred pages before he even talks about getting the role of everyone's favourite hockey mask-wearing killer. I knew about a lot of his other work like Prison, Texas Chainsaw 3 and The Last Boy Scout, but was not aware he was in a lot of the martial arts movies I watched as a kid, like Lone Wolf McQuade, Avenging Force and American Ninja. He was also the person rustling around in the garbage bag that William Katt beats with a shovel in House! 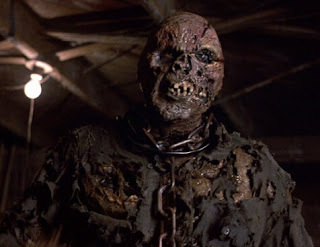 Kane Hodder as Jason in Friday the 13th Part VII.


There is also a good chunk of Unmasked dedicated to when he was unceremoniously passed over for Freddy vs. Jason. You can tell that whole thing crushed him, but says that being able to later play a new character in Victor Crowley (of the Hatchet series) went a long way toward healing that wound.

Even though all this stuff is great, the meat of the book is what lead up to his successful character as a stuntman. Hodder wasn't lying when he said this is an extremely personal book. He lays everything – the good, the bad and the very, very ugly – out on the page here. I've seen Kane Hodder in person three times now and I could always sense there was something different about him. 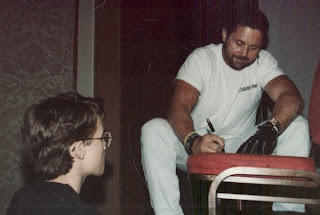 Me with Kane at Fangoria's Weekend of Horrors circa 1991.


I always chalked it up to his wry sense of humour (like how he straightfacedly states that at conventions he likes to brutally mutilate every thirteenth person in line), but it turns out that, by his own admission, he is a little fucked up. It started with the bullying he received as a youngster that fostered an uncontrollable rage which, even to this day, he finds difficult to curtail. He mentions several times in the book that if he wasn't able to channel this aggression into his film roles, he would almost definitely be behind bars.

The most disturbing passages in Unmasked are about the burn injury he suffered in his twenties. He was severly burned on over fifty percent of his body while doing a publicity stunt early in his career. The suffering Hodder endured, not only from his burns, but also the botched rehabilitation carried out by an inept hospital staff was immeasurable. When director Adam Green (who provides the foreward) said that some passages within are so gruelling you may have to take a break, I thought he was exaggerating for effect. He wasn't. Hodder's recollections during that time of his life got more harrowing with every page turn. It is truly a miracle that he got through that with any shred of his sanity left intact. Even after leaving the confines of the hospital, he still carries both physical and mental scars with him to this day. 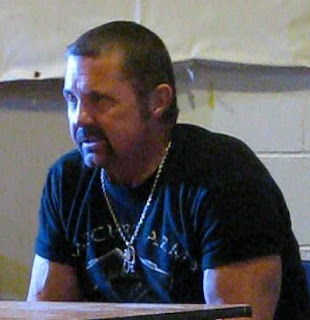 
I was a big fan of Kane Hodder before I read Unmasked. Now, after reading it, I cannot properly express the mad respect I have for this man. He overcame extreme adversity and never settled for anything less than achieving his dreams of becoming a stuntman. Even though he has killed over a hundred people onscreen, I can think of no better role model than Kane Hodder.
Posted by Jay Clarke at 10:02 AM

i wonder if he recognized you all these years later?

Hmmm, maybe that's why he grabbed me by the neck as he was walking by...