Well, That Was Bizarre.

Last year, there was a little movie called Detention that played SXSW.  This ‘slasher’ – it is many other things, but that’s the easiest way to tag it – got immediately bought by Sony, who promptly realized they had no idea what to do with it.  Flash forward to now, as director Joseph Kahn decided to release it himself to a few select theatres. On Wednesday, a few friends & I took a lengthy subway jaunt north to the strange Escher-like labyrinth that is Empress Walk to check it out. 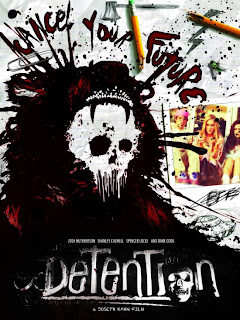 Outcast Riley Jones (Shanley Caswell) not only has to survive the perils of high school, but also a masked killer who has been killing off the student body.

After having seen the trailer, I was expecting something a little off-kilter, but nothing could’ve prepared me for just how wild Detention gets.  It took me a full half-hour to get a handle on just what I was watching. And even now, I’m still not exactly sure.  Like I said, at its core, I guess Detention is a self-aware slasher in the vein of Scream, but also overtly resembles elements of Breakfast Club, Heathers, Donnie Darko, Back to the Future and Saw.  And that’s not even mentioning the weird tangents that pop up in the second act.  With all of this stuff coming at you at once, it makes for a very unfocused experience for the most part.  There are so many jokes being thrown out that before you can even register the ones that fall flat, there is another one tripping over it. 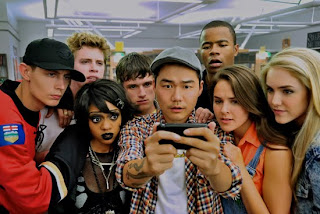 Since Detention runs at such a redlining level of self-awareness, it feels like it might at any moment explode into a million pieces.  I think the only reason it doesn’t come off the rails – and believe me there were parts where it was two wheeling it Temple of Doom style – is due to the matter-of-fact way it deals with all of its insane side plots.  Kahn’s visual style and soundtrack choices really gel with his movie, as well.

I don’t blame Sony for scratching their heads with this one.  I don’t really know whom this is for.  The infuriating subset that rejected Cabin In The Woods likely won’t get past the opening credits, and many others might be frustrated by its manic storytelling.  I mean, geez, the movie is called Detention, yet time served by the characters is but a small fragment of the movie. My friend Jeff brought up a good point that the movie seems like a good representation – albeit highly stylized – of high school life, but anyone of that age won’t get any of the pointedly nineties pop culture references.  I do have to say that the explanation for the conspicuous amount of said references was kind of brilliant though. 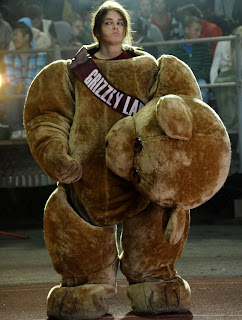 Overall, there’s a lot to like here, and the rest I can at least appreciate in a good-on-you-for-trying kind of way.  It’s a Catch 22 really, as I’d like to say that a more precise vision would’ve helped, but then again, it is Kahn’s wacky narrative that makes his movie unique. It's quite the dilemma.
Posted by Jay Clarke at 10:00 AM